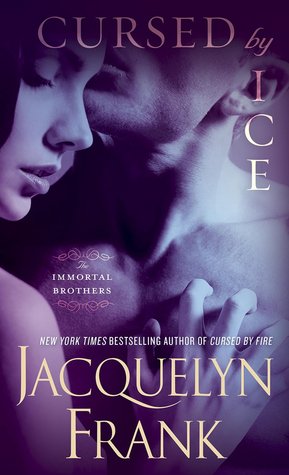 As punishment for plotting with his brothers to steal immortality, Garreth is suffering a freezing torment until the end of time. Again and again, his fierce fighter’s physique is frozen into a chiseled ice sculpture, his heart hardening like a diamond in his chest—only to thaw and resume the chilling torture. Until, like his older brother Dethan, he is offered a reprieve from a goddess—in exchange for his allegiance in a celestial civil war.

Garreth lives to fight and fights to live. But while laying siege to an embattled city, he finds another reason to go on—a beautiful warrior woman named Sarielle, who commands a mythic beast through a mysterious and powerful bond. Terrified of her strength, the city rulers have kept her captive, and now she refuses to submit to a new master. As Garreth seeks to unleash her passion and melt the icy resistance of her heart, will he become her ultimate salvation—or lead them both to greater destruction?

The Goddess Weysa freed him from his endless freezing torment in exchange for his allegiance in a celestial civil war but when Garreth seeks to unleash a beautiful warrior woman’s passion he could bring about the destruction of them both in this spellbinding paranormal romance.

Sarielle has always been a slave even if it is an elevated one because of her being able to control the wyvern and for this reason trusting the handsome warrior that disappears nightly is something she cannot do for other depends on her. The readers can’t help but be fascinated by the emotionally gripping romance between Garreth and Sarielle, two strong compelling characters that have so much going against them and yet so much desire in their heart and the fast paced plot keeps readers on their toes with lots of suspense, passion, turmoil and romance while the smoldering heat that steadily burns throughout the story spices things up quite a bit.

There is never a dull moment as excitement and anticipation builds as Garreth and his brother conquer more kingdoms in the name of their Weysa and danger seems to be right around every bend but so is betrayal and for Garreth, the looming curse that threatens his heart as well as everyone around him. The well written scenes and details paint vivid images of this fascinating world that bring it to life and makes it easy for the reader to get completely lost in the story as the well orchestrated events draw them in.

I love Jacquelyn Fran’s books, but I have to admit that while I enjoyed the first one I was a little worried about this series and its ability to measure up to the others but I no longer have that worry because this one erased it all and I can’t wait to read Jaykun’s story…I really wish I didn’t have to wait so long, especially after the stipulation the gods made when they freed him. 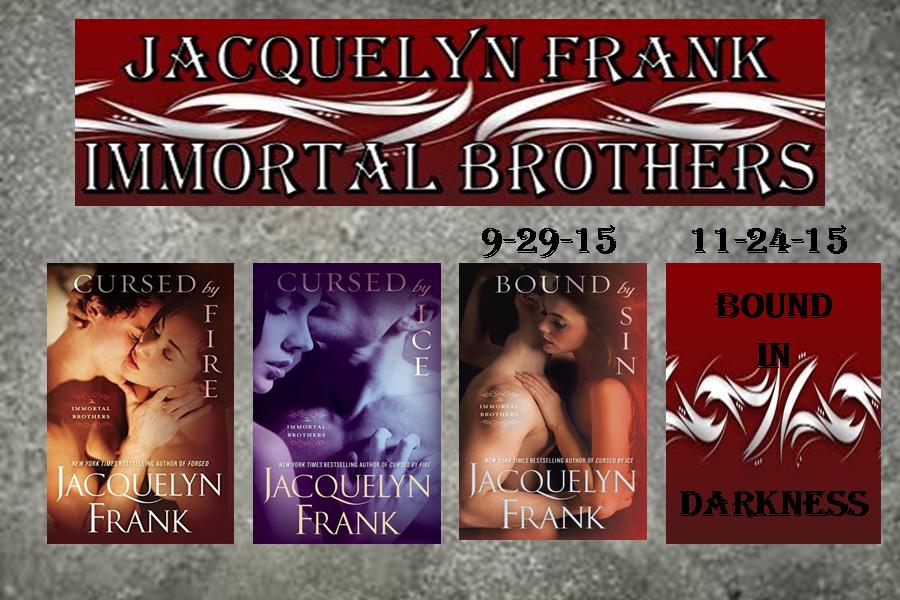 Here we are, a new year, a new bio. Life truly is dynamic so I have to keep updating this thing constantly.

What hasn’t changed? I am a native New Yorker, was born there and have lived a major portion of my life there. I was born on Lawn Guyland (that’s how we say it, I swear) but have resided in several places. I love animals, specifically cats, to a point of insanity (I actually bought a ‘Crazy Cat Lady’ action figure from a fan with a humor shop!) I love my boys like I would honest to goodness children. I am still writing, the muse taking me all over creation. (I was recently accused of having series ADD) But not to fear, I feel things coming full circle and we will be in the Nightwalker world again! I’m still living in Western North Carolina, a happy Asheville resident. My foster daughter, Bianca, still visits with me at least twice a year and is very much a part of my life.

That brings me to what has changed. I recently lost two of my boys. Damien and Magellan. All of you who know me know my cats are like my children, and these losses were utterly devastating to me. They were both very young and their deaths coming so close to each other was particularly painful. Also, my Nicodemous (named after the wise old rat in Nimh…but far too sweet to the inspiration for Nico my vampire villain) was diagnosed with kidney failure and I have to anticipate another departure soon. But my family has grown as well adding two new boys, Pierre and Sake. My rescue efforts have continued, and I find myself working with Brother Wolf Animal Rescue, Animal Compassion Network, and now T.A.A.G, another local group. We had a particularly huge kitten season in WNC this year and I was bursting at the seams with ferals the whole gang participated in socializing them making them suitable for finding new forever homes.

The whole gang consists of my new assistant, Natalie Justice and my housekeeper Donna. It’s a gorgeous triad of women that works so beautifully together, all of us knowing each others’ strengths and weaknesses and somehow all of us fitting so well that things get done and I get to write!

Other than this, I can only tell you that media is my life’s blood. Books, movies, music…I thrive on all of it. I can cross almost every genre, but I have my favorites so here goes: Female vocalists, like Evanescence’s Amy Lee, Lady Gaga, Rhianna, Katie Perry, Ke$ha and about a hundred other women artists who can get me moving and motivated with their voices are my preference at the moment. Books? Honestly, I find it hard to make time to read anymore, and when I do read it completely off genre and off my Kindle. I never thought I’d say it, but I don’t even like holding a book anymore!

As for movies, I admit it, I love disaster flicks. Something about the raw honesty in the end of the human race as we know it…or the charge of romance in impossible moments of desperation…but mostly I think it’s a tie between watching people bite the dust for being arrogant and doofy (my cynical side) and watching the human race persevere through the worst of situations because of their best qualities (and there’s the optimist aka romantic).
And I bet you thought I was going to say romance movies. AS IF! Pretty Woman? Bed of Roses? Titanic? (ooo…combo disaster and romance!) The Matrix? (Oh, it IS TOO a romance! Love saves Neo’s life!) It’s not as though I haven’t seen all of the above a hundred times over and STILL cry when I am supposed to! Do I seem that sappy to you? Do I?! Huh?!

This from the gal who bawls when she watches her Buffy because she and Angel are the next best tragic pair of lovers since Romeo and Juliet.

Okay, other than that…I am a former ASL interpreter, I have a degree and everything. Had to quit due to health issues conflicting with the work. If anyone tells you interpreting for the deaf is easy, tell them to hold their arms in the air and wave them around for an hour and a half straight without stopping. I’ve also done a few other things like substitute teaching, health aide, things like that, but I have wanted to be an author since I was barely into puberty. It was those sexy teen romances where the first kiss was as far as they went. Heh. I thought that was the be all and end all…then I got my hands on an introductory copy for a new series launching (ok, showing my age for those who are in the know) calledLoveswept and got my first taste of sizzle. I’ve been writing it and gobbling it up ever since! (You can assume I mean through reading if you like). I just found out Loveswept is coming back and I’m thrilled! I SO want to write for them. Even if just for fun!

Pet projects? Animals (yes, cats especially), we have too many of them. Spaying and neutering is crucial to population control, and population control means hundreds less feral creatures starving in streets and in barns everywhere. There are so many programs that will help with the cost of this, even trap and release programs of fixing ferals, if you seek it out. And if you can possibly pay it forward, the ACN, Friends 2 Ferals, BWAR and hundreds of other animal rescue outfits depend on our generosity. Please, make certain it is a legitimate association and that your gifts are going to the right place. Also, animal cruelty is one of the most horrifying epidemics in this nation. People think that because they are just animals that it’s okay to dump them by the roadside when kittens grow up and are no longer so adorable and sweet. Or that they can kick them around or ignore their responsibility to their health and safety needs. North Carolina has yet to outlaw the use of the gas chamber when euthanizing animals. This is something that should be protested by writing to the representatives of the state, whether you are a resident or not. I could go on forever about this. And maybe you’re thinking there is so much HUMAN angst to worry about, why waste time on animals? I guess because we’re all connected to the same earth, the same creative karma and, perhaps, the same pool of souls. If we fail one, we hurt all of us. If we save one, we heal us all. Even the tiniest, purring creature can teach us more about ourselves and our ability to love than we might ever imagine. Who wouldn’t want to save that?

Jacquelyn likes to hang out at:

For more books by Jacquelyn: