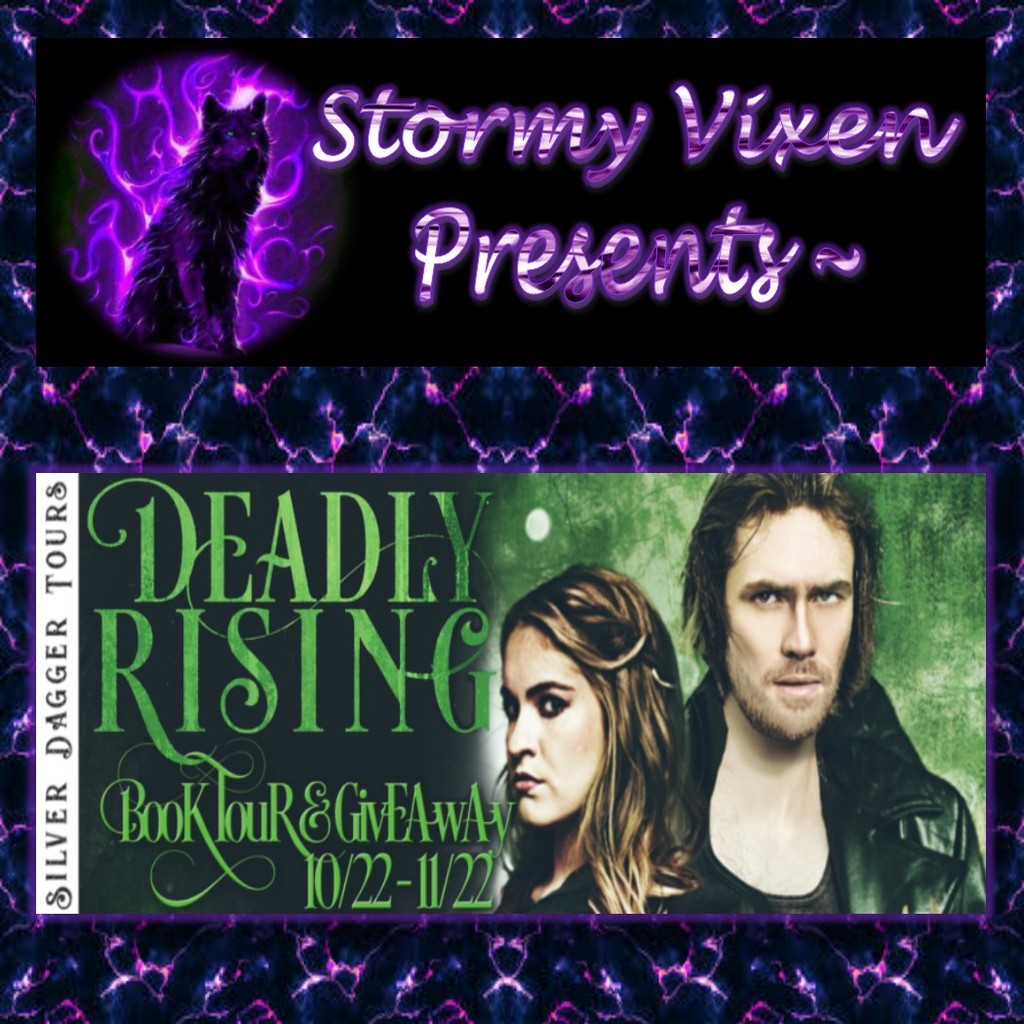 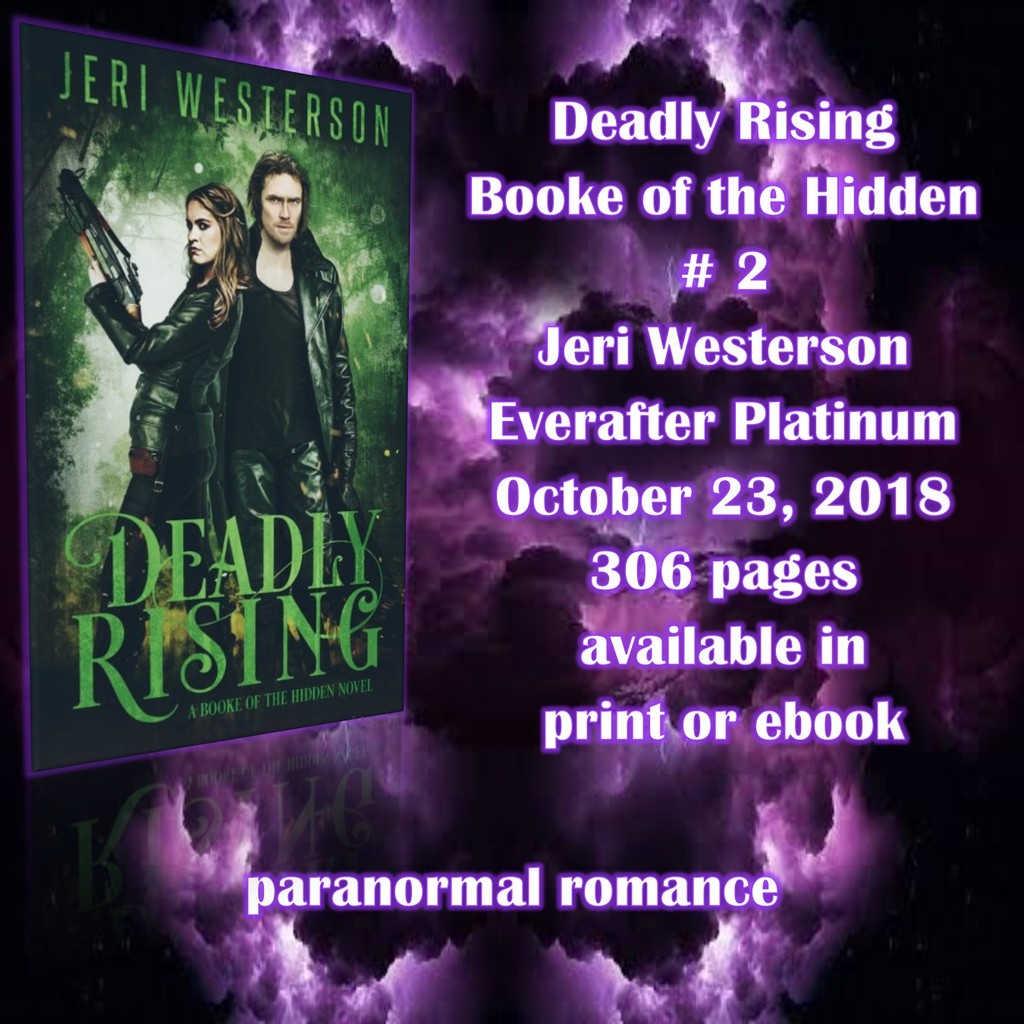 Things were quiet in Strange Herbs & Teas. For about a week.
Our crossbow slinging hero and her ragtag gang of Wiccans tuned in to the paranormal have earned some rest. But when Kylie learns that the Booke may have released not one, but two creatures of horror out into the world, it’s up to her to save Moody Bog. Again.

Calling upon the devilishly handsome demon Erasmus once more for help, Kylie’s determined to handle the mischief of the Booke and go back to a normal life. But when digging through Moody Bog’s history leads her to the ghost of her grandfather, the past she once knew is turned upside down.
Can Kylie save the town and her grandfather, or will the horrors of the Booke be too much to handle? 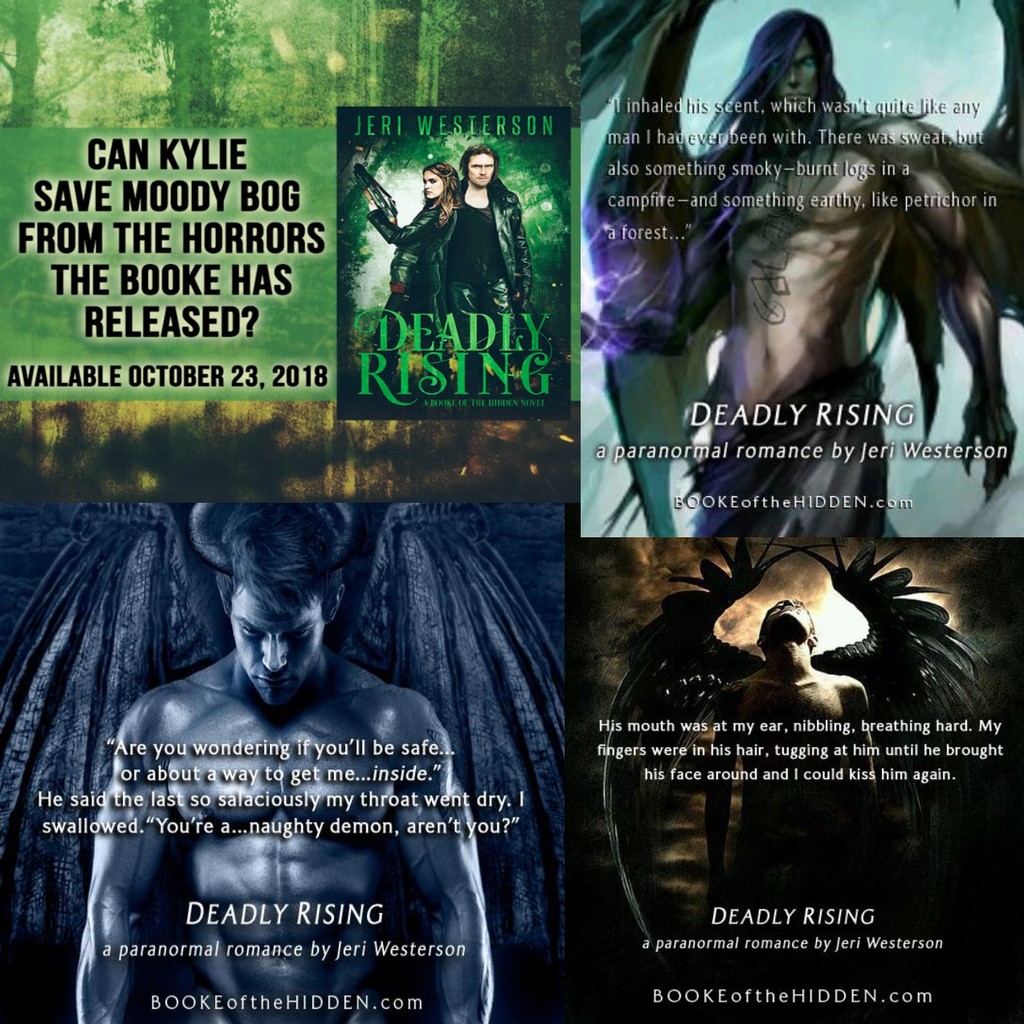 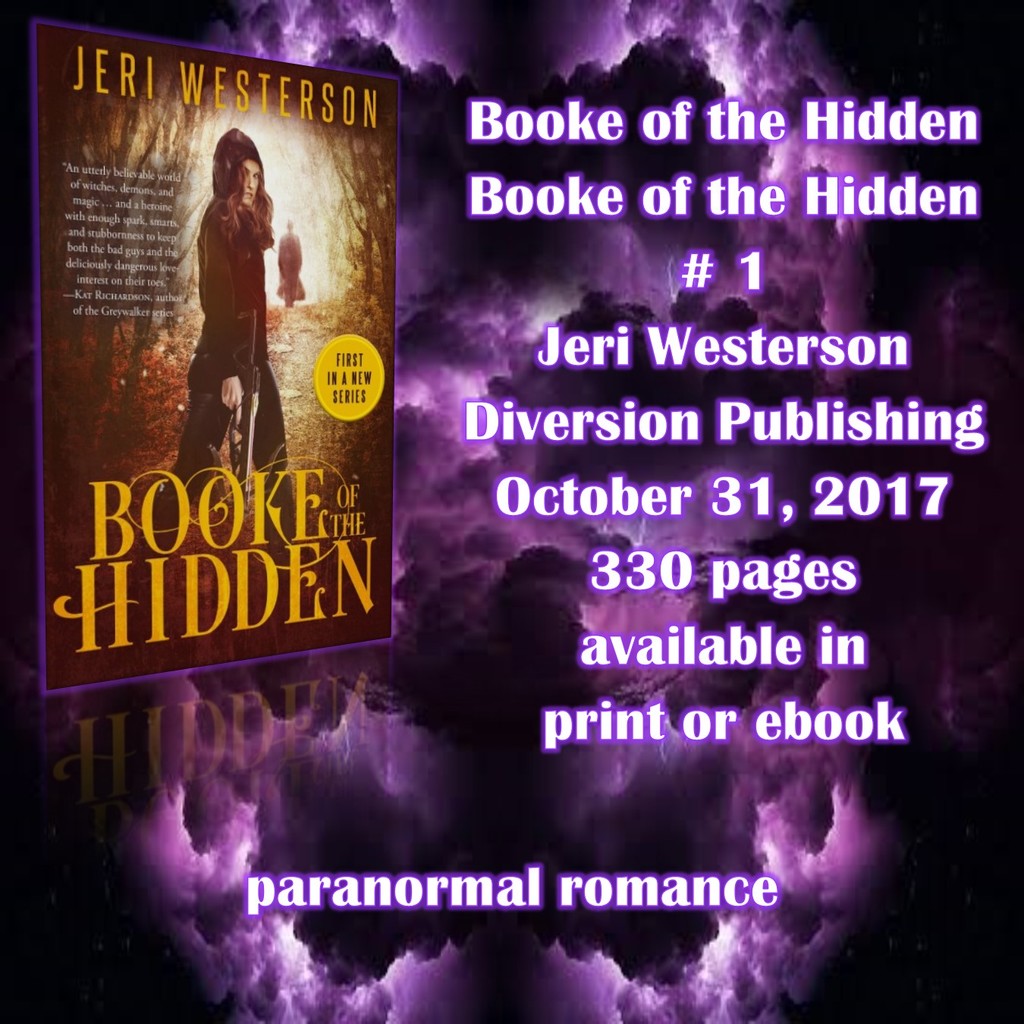 “Westerson creates an utterly believable history of witches, demons, and magic for her claustrophobic New England village including a heroine with enough spark, smarts, and stubbornness to keep both the bad guys and the deliciously dangerous love-interest on their toes.” —Kat Richardson, author of the Greywalker series

To get a fresh start away from a bad relationship, Kylie Strange moves across the country to open a shop in a seemingly quiet town in rural Maine. During renovations on Strange Herbs & Teas, she discovers a peculiar and ancient codex, The Booke of the Hidden, bricked into the wall. Every small town has its legends and unusual histories, and this artifact sends Kylie right into the center of Moody Bog’s biggest secret.

While puzzling over the tome’s oddly blank pages, Kylie gets an unexpected visitor—Erasmus Dark, an inscrutable stranger who claims to be a demon, knows she has the book, and warns her that she has opened a portal to the netherworld. Kylie brushes off this nonsense, until a series of bizarre murders put her, the newcomer, at the center. With the help of the demon and a coven of witches she befriends while dodging the handsome but sharp-eyed sheriff, Kylie hunts for a killer—that might not be human. 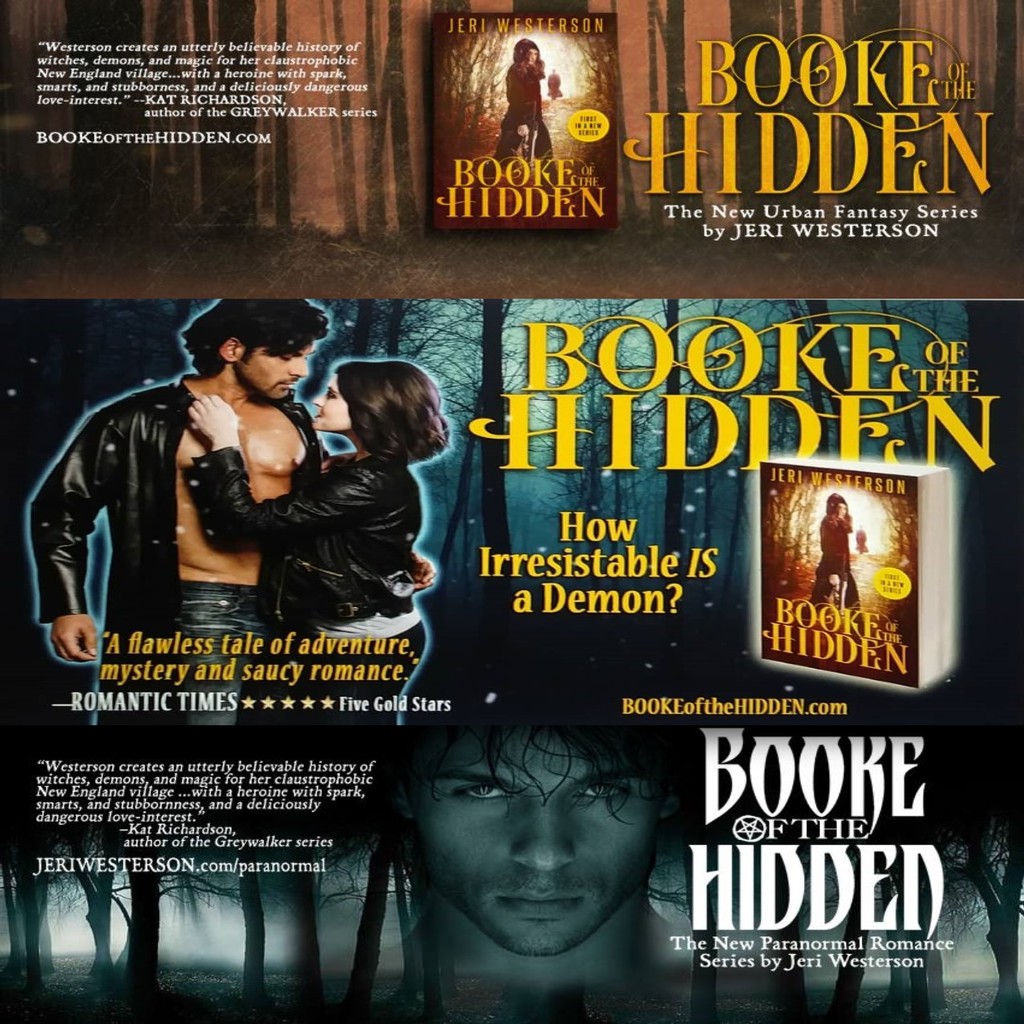 BOOKE of the HIDDEN series – Booke of the Hidden – A scene between the demon Erasmus Dark, and the heroine, Kylie Strange discussing the Booke of the Hidden.

“Mortals,” he muttered with a sneer. “I—who have been intimately intertwined with the book, captured by its covers for thousands of years—I don’t even know what it does or why. Do you think for one moment I like this? That I like being yanked about from century to century, to listen to the mewling of each Chosen Host as she does her job. Do you think I truly enjoy taking my—”

He stopped, shutting his lips as if locking a door on them.

“Never mind,” he growled. “This is my lot in life. I was created for this. And I shall be part of it until the end of time.”

“I’m stopping this Booke. This is the last generation of crap from it. Its days of taking a Chosen Host are over. My family…” I laughed, thinking about it. It’s our curse. Did we bring it over to the New World? How long had my ancient ancestors been entrusted with this thing? Cursed by it? “When I close the covers of this Booke, it isn’t opening again for anyone else.”

He folded his arms. “Oh, how the arrogance of the human race astounds me. Go on. Tell me. Explain exactly how you are going to do that?”

I shrugged. “I don’t know. But I’ve got my Wiccans. We’ll figure something out. I’m not alone, you know.”

His expression faded and his arms fell away from his chest. “I see. You…you think to succeed where others have failed. Well…the others were alone. Perhaps…perhaps there may be something to what you say.”

That gave me hope. No, I wasn’t alone. If those other Chosen Hosts had struck out on their own without any back-up, then of course they had little chance. Ha! I had my little army. There was a chance. But then…

“What happens to you?”

He looked toward the floor, his long hair hanging over his face and hiding his eyes. “Then I…cease.”

When he lifted his face there was no expression either on his face or in his usually expressive eyes. “I fail to exist. Or in your parlance, I die.”

“My sole existence is to serve the one who opens the book. There is no other reason for my creation. When the book dies, so, too, do I.”

“And why, by Beelze’s tail, would you want to do that?”

I breathed. There should have been a lot swirling around in my mind but there wasn’t. Only the aspect of this stupid demon’s non-existence. I couldn’t fathom it. I didn’t want to. Striding forward I took his face in my hands and kissed him.

There were suddenly arms around me holding me close. His mouth opened and his lips—so hot, so wet—kissed me urgently, as if it was his last day on earth. I tried not to think about that and just surrendered myself to simply feeling.

He nipped my bottom lip and grazed my chin with his teeth. His mouth was on my neck and I arched toward him. I could feel his hardness through our clothing and I had a flash of about a week ago of my bed, the quilt, the body of a god, and the wildness as we let ourselves go. I began vaguely wondering about the kitchen floor when he suddenly drew back. I nearly fell backward when he released me and turned away.

Stumbling, I adjusted my stance and wiped the wet from my mouth.

His back was to me, and his shoulders were heaving with great gusting breaths. “Damn you,” he murmured.
“We…can’t.”

“That was my arrogance. And my folly.”

I breathed, trying to control the tremors in my body. How he could get me into such a lather I’ll never know. Even harking back to my evening with Ed, it had been good with him…but it was never like this. 1. What makes this particular genre you are involved in so special?

Because you're bringing in magic and fantasy and danger and romance. It's almost a whole shelf of books rolled into one genre. I like that you can spin a tale in any time period, with any creature, and make it your own by tweaking this or that and giving it your own history and backstory. Fantasy and sci fi have always played a big role in what I have loved to read, and now that I've given myself permission to write in this genre, the sky is the limit.

2. How important is research to you when writing a book?

It's always important. I started out writing medieval mysteries, and if there was any one thing a reader expects, it is that the author gets the history right. In that genre, you never changed the history to suit the plot, and that is very good training for writing anything. In other words, be true to the world you've built. When something is set in our era, it's still vitally important to get the facts right--the town, the police force, the names being used, and a myriad of other things--because once the foundation is established, you can build whatever fantasy world on top of it you like. The reader needs that foundation so they can relate to those inhabiting that world. It becomes a jumping off point for the reader to fly with you on whatever whirlwind you take them.

3. When did it dawn upon you that you wanted to be a writer?/What inspires you to write?

I've been a writer since I could pick up a crayon, illustrating stories I wanted to tell. But I never pursued it as a career choice until much later in life. I always wrote in the background just for fun, even though no one else knew I was still doing it. I wanted to go into acting, but doing auditions in the real world convinced me I didn't want to participate in that process the rest of my life. So I turned another hobby into a career; art. I was a graphic artist in Los Angeles working in-studio as well as freelancing for some fifteen years. When I paused my career to have a baby and then tried to get back into it when he was a toddler, I found that the whole industry had turned to computers, and I knew nothing about them. I wanted to do something where I could stay at home and raise my kid, so I decided to buckle down and become a novelist. How hard could it be? Plenty hard, I discovered, but after a decade of writing many different books and after several agents, I finally landed a contract with a big New York publisher for my medieval mystery. Though I'm still writing and finishing up a long time series in that genre, I've turned to writing paranormals. It's a LOT of fun.

4. Do you set a plot or prefer going wherever an idea takes you? - Plotter or pantser?

I started off as a pantser, then got down to business and had to be a plotter for two reasons. One, I was writing several books a year on deadline and had to know what I was writing every day, and two, I was getting to the point where I was forgetting what I had wanted to write in each story. But after years of that, I suddenly couldn't outline anymore. And so I've become a pantser again, and it feels great. I always know how the book begins and how it ends, and I keep copious notes and research as well as scenes and bits of dialog in a spiral bound notebook for each book, but it's pretty much a new thing each day.

5. Do you read much and if so who are your favorite authors?

I read a LOT. Anyone who wants to write should read piles of books in all sorts of genres, including non-fiction. It helps you build a vocabulary and opens you up to new styles of writing and new adventures. I've loved older mysteries from Dorothy Sayers, Raymond Chandler, and Dashiell Hammet, as well as classics like Dickens and Shakespeare (I'm a bit of a Shakespeare groupie, actually), and lots of contemporary authors like Larry Niven, JK Rowling, JRR Tolkein, Alan Moore, Charlaine Harris, as well as lots of mangas. My advice to young writers is to read the classics and be open to any and all literature. A lot of contemporary authors reach back to the classics to get their plots and themes. Steal from the best, I always say. Print Copy of Both Books! $15 Amazon Los Angeles native and award-winning author Jeri Westerson writes the critically acclaimed Crispin Guest Medieval Mysteries, historical novels, paranormal novels, and LGBT mysteries. To date, her medieval mysteries have garnered twelve industry award nominations, from the Agatha to the Shamus. Kirkus Review said of her latest Crispin Guest Medieval Mystery A MAIDEN WEEPING, “Once again Guest’s past misdeeds actually help him in the present in a case that includes plenty of red herrings and an interesting look at medieval jurisprudence.” Jeri is former president of the SoCal chapter of Mystery Writers of America and frequently guest lectures on medieval history at local colleges and museums. She lives in southern California with her home-brewing husband, a complacent tortoise, and 40,000 bees.