Part snake, part human, and—some would say all bitch—Captain Tannis of the starship El Cazador has one goal in life—to earn enough credits to pay for the Meridian treatment to achieve the immortality she craves. And one last job will get her there. The assignment: protecting the most powerful man in the Universe.

Being leader of the known universe isn’t all it’s cracked up to be. In fact, it sucks big time. And after five hundred years, Callum Meridian, founding member of the Collective, is bored out of his mind. But as things are changing, he’s changing—into what, though, he isn’t sure. Callum is determined to discover the truth, and he’s employed the crew of El Cazador to help him do it.

Not everyone agrees with his plan, though. His own people will stop at nothing to prevent the truth coming out, the Church is taking advantage of the confusion and attempting a coup, and even the crew of El Cazadorseem close to tossing him out the airlock without a space suit. But defying death has never been more dangerous, sexier, or more fun.

The third book in the Blood Hunter series is a thrilling adventure that keeps the reader on the edge of their seat.

Captain Tannis of the starship El Cazador  is part snake and part human and she has one goal in life – to earn enough credits to pay for the Meridian treatment to achieve the immortality she craves and this one last job will her there.  Founding member of the collective, Callum Meridian is the most powerful man in the universe, but the Meridian is changing him and he’s not sure what he’s changing into.  Determined to find the truth he hires the crew of the El Cazador to help him do it. But not everyone agrees with his plan, his own people will stop at nothing to prevent the truth coming out, the Church is attempting a coup, and even the crew seems close to tossing him out him airlock.  Defying death has never been more dangerous, sexier or fun.

This fast paced and smooth flowing plot gets the adrenalin pumping with lots of action, intrigue and romance.  The author brings the story to life with vibrant images and details that make it seem as if the reader is part of the story.  The strong compelling characters grab the reader’s attention and doesn’t let go and are easily related to.

The attraction between Tannis and Callum explodes from every page, but the romance has lots of obstacles to be overcome not to mention that they are constantly fighting for the lives which make for a very entertaining and engaging read.  A couple of scenes brings tears to the eyes and there are quite a few laughs caused by snarky dialogue and characters attitudes.

The author introduces new characters that are as fascinating as the previous characters and the story line just keeps getting more absorbing and enjoyable. I totally caught up in the story from beginning to end and while I was upset at a couple of events, it is obvious that they had to happen or the story wouldn’t have been as believable. I can’t wait to see what happens next in this series, I can see several possibilities, but I do believe the Nina Croft will just keep surprising me. 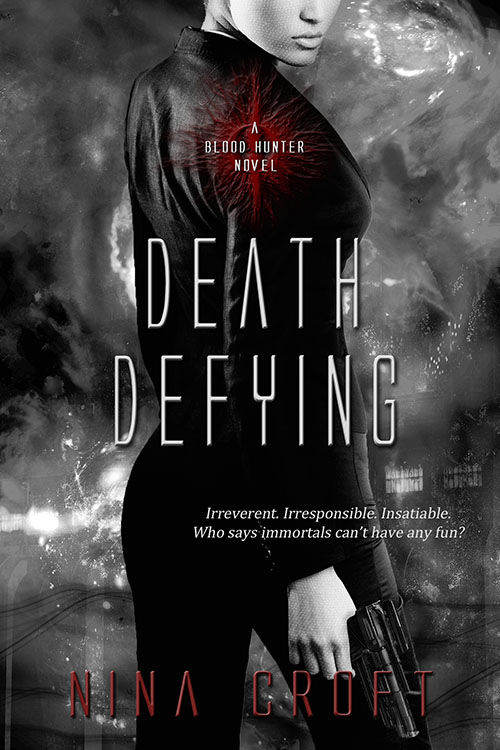 The year is 3048, Earth is no longer habitable, and man has fled to the stars where they’ve discovered the secret of immortality—Meridian. Unfortunately, the radioactive mineral is exorbitantly expensive and only available to a select few. A new class comprised of the super rich and immortal soon evolved. The Collective, as they’re called, rule the universe.

But as with any civilization there are some people who just don't want to be ruled. So meet the crew of the space cruiser, El Cazador de la Sangre (The Blood Hunter) and join us on our adventures, romantic and otherwise, as we wreak havoc across the universe...

Captain: Tannis is the captain of El Cazador (Rico likes having his own space ship but doesn’t want the responsibility of being captain—he’s not the responsible type). She’s also Rico’s best friend—well actually his only friend. Tannis is a GM or genetically modified, she’s mostly human but with a little bit of snake DNA in there (doesn’t show much except she’s long and thin, with luminescent skin and yellow eyes). She’s fiercely loyal to her crew but more than a little mercenary and has an annoying (or so Rico thinks) tendency to sarcasm when she should be providing sympathy.

Nina Croft grew up in the north of England. After training as an accountant, she spent four years working as a volunteer in Zambia which left her with a love of the sun and a dislike of 9-5 work. She then spent a number of years mixing travel (whenever possible) with work (whenever necessary) but has now settled down to a life of writing and picking almonds on a remote farm in the mountains of southern Spain.

Nina's writing mixes romance with elements of the paranormal and science fiction.