As Lucien, Rory and Ellie navigate the intricacies of a full triad, including one man new to man-love, they also have to seek and destroy the source of the sickness afflicting witches.

Every Vampire Lord needs a shifter bodyguard. Rory has been Lucien's for a while now. And although Rory's been protecting Lucien's body, Lucien has just been plain lusting after Rory's body. Unfortunately, Rory's been rebuffing Lucien's advances. That is, until Ellie comes along with her witchy bad self. The Witch Council is sending her to Dallas in her capacity as Enforcer. And to make matters more interesting, they're also sending Lucien and Rory.

Ellie's mission is to find and destroy the source of the witch sickness. Along the way, she uncovers Rory's reason for hesitating in accepting Lucien's advances. Rory's never been with a man before. As a result, Rory and his wolf were confused when Lucien came on to him. But with Ellie’s help, Rory’s not confused anymore. Now, what happens in Dallas... well, it’s not going to stay in Dallas. 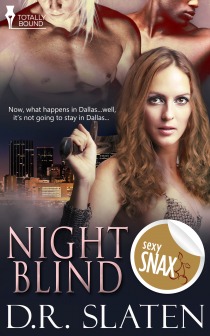 ~ In the beginning… humans and OtherKind lived together almost in a parallel existence, one oblivious of the other while the Other avoided humans if possible. There weren’t many OtherKind back in the day. The loss of magic and the brutal dominance fights took its toll on the OtherKind numbers.

Slowly, magic has been returning. Surreptitiously, notions of civilization curtailed the most brutal aspects of OtherKind temperament. Steadily, the OtherKind numbers have been increasing. Secretly, the hidden enemy has been plotting to fracture the OtherKind Council and seize power in the chaos.

With one opening gambit, the world changed unbeknownst to said world’s inhabitants– or most of them.

~ After the initial stealth attack failed, the enemy left all pretense of subterfuge behind and began direct attacks on the OtherKind. Kidnappings and murders are just some of the tactics undertaken by the madman determined to rule the world.

Lines are drawn and sides are chosen as OtherKind fight for their freedom, and in some cases, their very existence. Undertaking the battle, heroes and heroines will emerge showing courage under pressure and a stunning ability to adapt– which will be needed as the reality of their new magic-flooded world becomes increasingly more apparent.

Enemies become known, allies are solidified while time has run out… for everyone.

I used to do other stuff. Now I write sexy books.

When I am not writing, I sing in the shower- terribly, inadvertently kill all the flowers I plant and shop for high end shoes at bargain prices on the internet. I love dogs, although both of mine have long since gone to doggy heaven. I read lots of books in a variety of genres. I make fun of the news and reality TV. I think chocolate should be on the food pyramid as its own category. Dirty martinis are my preferred drink. I think good friends and good conversation over a good meal is the ideal way to spend any free time. I’m not human until and unless I have had my first cup of coffee. And last but not least, I always try to buy flowers for my hotel rooms because it just makes it feel more like home.