If you are a fan of murder mysteries with a psychic twist, Seeing Evil by Jason Parent might just be for you.

Jason, you don’t like tether ball? I can see how you would visualize it as a murder weapon. LOL I used to be the queen of our grade school and even had one at home. I love to learn fun, inane things about authors. It gives me some insight into their personality, so be sure and take a look at Jason’s biography for yourself. 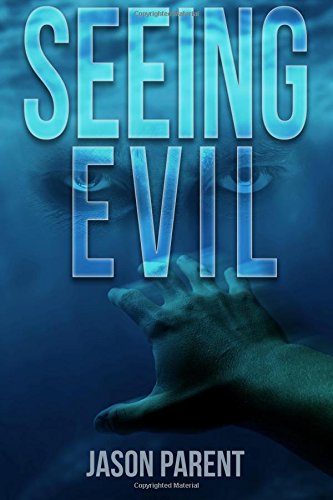 Jason Parent’s latest novel is a mystery with a psychic twist that had me interested from the moment I read the blurb. It may even be considered as part of the horror genre. Monsters come in all shapes and sizes and the human kind are the worst. Seeing Evil has its share of evil of the two legged kind.

Seeing Evil’s blue watery looking cover, with the eyes looking at me, peaked my interest further. A lot of times, I will grab a novel just because of the cover and this is one of those novels. Job well done Jason and Streetlight Graphics.

The main cast of characters include Fall River Detective Samantha Reilly, Michael, a foster kid who has a special gift, and Tessa, a young girl haunted by her dreams, or should I say nightmares. And, of course, the killer, but I can’t tell you much about him. You will have to find out for yourself.

Samantha has been involved in Michael’s life since his parents were killed when he was three years old. He is the new kid in school and bullied mercilessly. After he was viciously assaulted, he developed a gift, or was it a curse. Why were the visions so horrible? Why didn’t he see wondrous things? He could see bad things coming to people he touched, but was unable to convince those in authority of what was coming. Even Samantha has doubts, until…

Samantha and Michael step out of the normal police investigation mode and hunt for the killer, putting themselves in extreme danger.

I liked that Jason Parent pointed out how often we come in contact with strangers, a casual touch here or a brush against them as we pass by. It is details like this that give a feeling of reality to a novel.

Poor Tessa. She is horribly abused by her father and wonders if he hates her or just takes pleasure in inflicting pain. Evil walks in all forms and doesn’t have to be supernatural. I couldn’t help but feel for her as she searches for a way out of her terror filled life. Isn’t there anyone who can help her?

I see how destiny will draw them all together, but who will be left standing and how damaged they will be when they get there, I am very eager to find out.

Grotesque mutilations, horrendous torture, is there a serial killer on the loose in Fall River? Is Tessa a victim or a perpetrator? What is Michael’s part? Can a psychic who has visions of the future alter the outcome? I don’t see why not and I am hoping so.

Seeing Evil by Jason Parent is a police mystery with a paranormal twist. As the story progresses, the tensions builds and the suspense mounts making me wonder if they will all survive. The killer did not come as a huge surprise, but more than once I was talking to the characters, telling them to not go there, don’t do that, RUN for your life.

The flawed and damaged characters add elements to the story that up my investment in the reading. I am into the characters so much, I wonder if we could be hearing more from Samantha and Michael, even Tessa, in the future.

I loved Seeing Evil. Jason Parent did a fantastic job of grabbing my interest and holding it throughout. I am looking forward to reading more of his work.

I was given a copy of Seeing Evil by Jason Parent in return for an honest and unbiased review.

Major Crimes Detective Samantha Reilly prefers to work alone—she’s seen as a maverick, and she still struggles privately with the death of her partner. The only person who ever sees her softer side is Michael Turcotte, a teenager she’s known since she rescued him eleven years ago from the aftermath of his parents’ murder-suicide.

In foster care since his parents’ death, Michael is a loner who tries to fly under the bullies’ radar, but a violent assault triggers a disturbing ability to view people’s dark futures. No one believes his first vision means anything, though—not even Sam Reilly. When reality mimics his prediction, however, Sam isn’t the only one to take notice. A strange girl named Tessa Masterson asks Michael about her future, and what he sees sends him back to Sam—is Tessa victim or perpetrator?

Tessa’s tangled secrets draw Michael and Sam inexorably into a deadly conflict. Sam relies on Michael, but his only advantage is the visions he never asked for. As they track a cold and calculating killer, one misstep could turn the hunters into prey.

In his head, Jason Parent lives in many places, but in the real world, he calls New England his home. The region offers an abundance of settings for his writing and many wonderful places in which to write them. He currently resides in Southeastern Massachusetts with his cuddly corgi named Calypso.

In a prior life, Jason spent most of his time in front of a judge . . . as a civil litigator. When he finally tired of Latin phrases no one knew how to pronounce and explaining to people that real lawsuits are not started, tried and finalized within the 60-minute timeframe they see on TV (it’s harassing the witness; no one throws vicious woodland creatures at them), he traded in his cheap suits for flip flops and designer stubble. The flops got repossessed the next day, and he’s back in the legal field . . . sorta. But that’s another story.

When he’s not working, Jason likes to kayak, catch a movie, travel any place that will let him enter, and play just about any sport (except that ball tied to the pole thing where you basically just whack the ball until it twists into a knot or takes somebody’s head off – he misses the appeal). And read and write, of course. He does that too sometimes.

Please visit the author on Facebook at https://www.facebook.com/AuthorJasonP…, on Twitter at https://twitter.com/AuthorJasParent, or at his website, http://authorjasonparent.com/, for information regarding upcoming events or releases, or if you have any questions or comments for him. Thanks for visiting fundinmental!