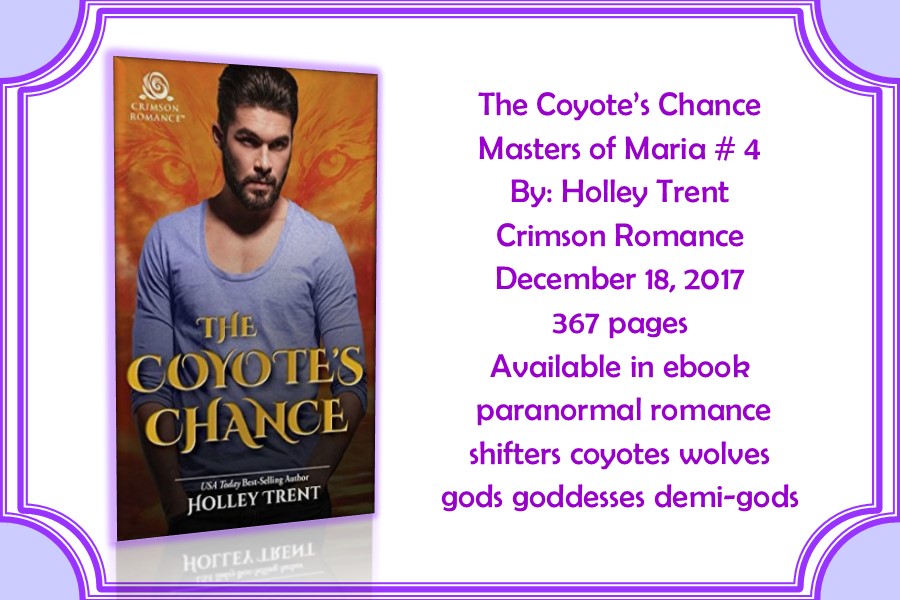 It’s a literal fight for love in this fast-moving shifter tale in the popular Masters of Maria series.

For coyote shifter Blue Shapely, becoming the new alpha of Maria’s pack is his long-awaited chance to be his own man and eliminate chaos from the town. Unfortunately, the pack’s patron is thwarting him at every turn.

After being magically attached to the Coyote group for more than a century, demigoddess Willa Matheson has a soft spot for them—even the dangerous ones threatening to expose them to humans. She may have hired Blue to rein in the pack, but the two constantly disagree on strategy. She doesn’t want to upset anyone, whereas he’ll do whatever it takes to get his Coyotes in line. And to make things worse: all signs point to the anxious demigoddess being his mate.

But developing a tenderness for Willa will be an obstacle to Blue’s determination to be as ruthless as he needs to be. If the duo can’t find a way to retract their claws, and soon, it may be too late to protect the pack’s secret—and their own hearts.

The Coyote’s Chance is an enchanting book that characters were a bit surprising because they were in no way what I was picturing. But this is a good thing, because the difference added a whole different feel to the book and made it a very interesting read. Willa was the most surprising because her being a demigoddess had picturing a whole different personality but the surprise that the author had in store for me added a lot of depth to the characters and definitely had me emphasizing with the characters as I became totally engrossed in the rocky relationship growing between these two characters. As usual, Holley Trent manages to portray her characters with a vibrancy that makes it easy for readers to become caught up in the story as well as ensuring that the characters heat up the pages with lots of steamy passion.

The readers are also kept glued to the pages by the suspense that builds throughout the story regarding their respective fathers who cause some major conflicts for Willa and Blue and what their future has in store for them. Lots of action and thrills to keep reader’s on the edge of their seats but what’s more, the author adds some unexpected twists to keep readers guessing as to what will happen next or even if Willa and Blue shall overcome some major obstacles in their search for their happily ever after.

Holley Trent has added another enchanting book to her growing list of wonderful books as I was totally captured by Willa and Blue’s story and I can’t wait for the next Master of Maria book.

The Coyote’s Chance is the 4th book in the Masters of Maria series.

The Coyote’s Chance is available in ebook at:

Holley Trent can be found at: