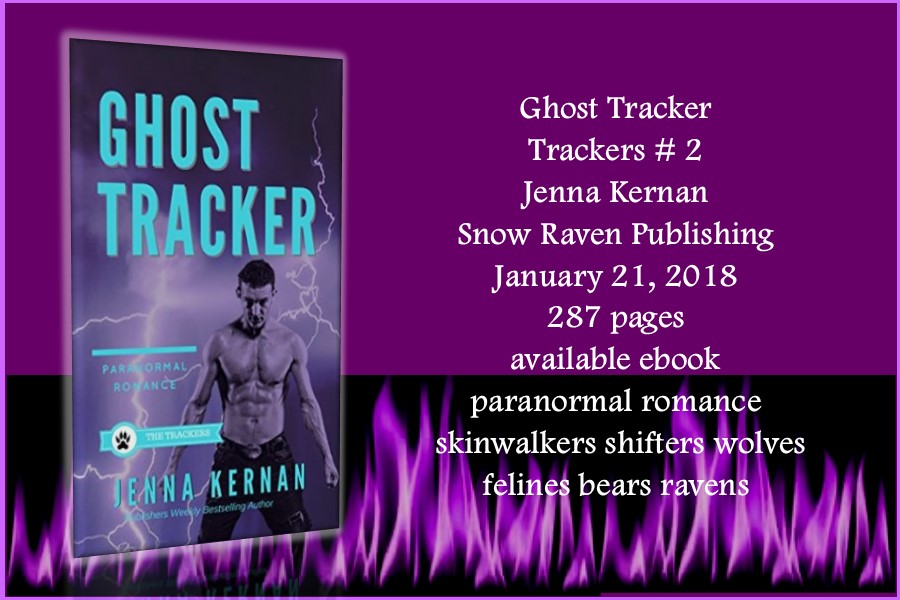 When wolf Skinwalker, Nick Chien, is attacked by ghosts, the Thunderbirds leave him at the mercy of an enemy healer, a Dreamwalker, with supernatural powers as dangerous as his own. Her duty as a Spirit Child is to kill him. But she instead determines to learn if his wild story of being attacked by ghosts is true.

While walking in his dreams, Native American Jessie Healy, sees the truth...the threat is real. Nagi, the Ruler of the Circle of Ghosts, is using his ghosts to take possession of humans and attack the living. She also discovers, that in his dreams, they can explore a passion forbidden between their people when awake. But upon waking, they face more than the discovery of their attraction. They must confront an enemy that could destroy them both.

Jenna Kernan’s Tracker series is a wonderful world full of intriguing mythology, fascinating characters and she brings it all to life with well written descriptions that makes it easy for the readers to become part of the story as it takes place.

Nick and Jessie are strong, captivating characters that easily draw readers in and then refuse to let go because they have lots of sizzling chemistry but due to cultural differences they try and fight that attraction which keeps a lot of tension and angst which makes the romance quite rocky and keeps readers wondering if this couple will reach their happily ever after moment.

The story starts off with a bang as the enemy targets Nick and then he finds himself injured on Jessie’s doorstep and the suspense and anticipation builds from there keeping readers on the edge of their seats with this fast paced plot.

The mythology mixed in with the romance and the author’s type of characters adds interest and a little something extra as it adds to readers knowledge and changes things up a bit. Skinwalkers have always fascinated me and this book really brought them to life and so I was quite enthralled with the story from the very beginning and even though I haven’t read the first one yet, I had no trouble catching on to the plot and the bad guy’s intentions, of course, now I will be adding the rest of the series to my TBR pile.

Ghost Tracker is available in ebook at:

Jenna Kernan can be found at: