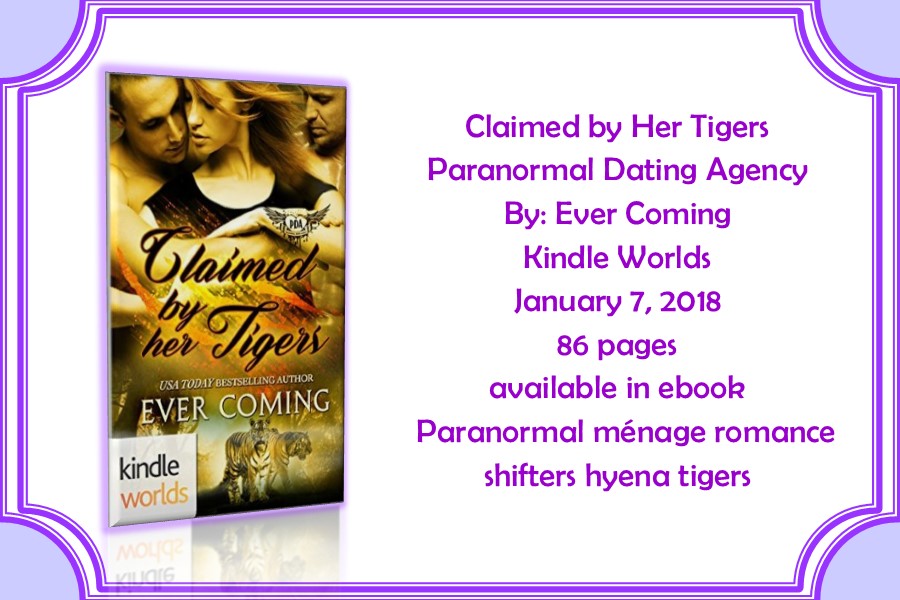 Juniper Hiti calls to cancel her blind date. Gerri Wilder is having none of that.
When hyena shifter Juniper puts in an application at the Paranormal Dating Agency, she hopes to thwart her mother’s plan to arrange her mating. But according to her mother, the cackle’s alpha female, contracts have already been signed. Juniper sees only two choices: Agree to her mother’s plans and be sold to the highest bidder or disappear. She chooses the latter.

But when Gerri arranges a date for you, you’d better believe she’s going to make sure attend.

When her two hot dates, Noah and Shane, come knocking on her door just as she is about to flee her mother’s arranged mating, she does what any woman in position would do. She agrees to one night.

Juniper soon discovers that one night with her sexy tigers will never be enough.

But with broken contracts come consequences, consequences all three will face. Noah and Parker are ready to claim her, consequences be damned. But can they convince their sassy hyena to agree?

Claimed by her Tigers is an MMF Dating Agency Shifter Romance featuring a curvy woman and two hot tigers ready to claim their third.

Claimed by the Tigers is a delightfully red hot quick read that gets the blood pumping. The characters are strong and compelling drawing readers in and refusing to let go while the romance is full of heat and suspense ensuring that readers want to know the whole story and there is a couple of unexpected twists that surprise the characters as well as the readers. The story has some sizzling sex scenes that burn up the pages and have readers panting for more.

This is the first book that I have read by Ever Coming and I am pleased to say that it won’t be the last as I found the story to blistering hot and charming, which quite a pleasing combination.

Claimed by Her Tigers is available in ebook at:

Ever Coming can be found at: