Anthony Renfro is reVamping the cover and updating the short story for A Vampire at Christmas.

Merry Christmas to you, but beware... Anthony Renfro's short story, A Vampire at Christmas has been rewritten and given a new cover. I am excited to see what he has done with Talan, a hot and sexy vampire. Talan had been coming home from seeing his fiance, when robbers attacked him and left him for dead. In turn, a vampire took out the robbers and left him with an alternative, immortality or death. He passed out before making the choice, so the vampire made it for him. His blood tasted sweet, while the robbers had tasted salty. MMMM Ever meet a Parrothead vampire? How about a vampire who’s favorite time of year is Christmas? Do they decorate trees with lots of blinking, sparkling lights? He hung pictures of sunrises around the crypt to remind himself that he was once human. He wears work boots and a Jimmy Buffet concert shirt. He would have played music if he felt no one would hear. His favorite song is Margaritaville. Discovering Christmas had changed his feeding pattern. Now he chose mostly those who deserved it. And had something special for those he felt worthy. How would you like to see Talan coming down your chimney? I love Talan and the humorous/horror writing of Anthony Renfro.

(Revised and Updated 2015) A short story about a Vampire who uses his riches and immortal skills to bring joy to those in need during the Christmas Season.

5 out of 5 stars: A deadly and dashing vampire

Amazon EBook: US / UK / AU / CA
EXCERPT
Talan Gawayn became a vampire in the 15th century on a cold, starry, full-moon night just after the first big snow of November. He was walking a less traveled path, on his way home from seeing his fiancé, whom he planned to marry the following spring, when three men stepped out of the shadows to rob him. He fought them at first, but they soon overpowered him, beat him ruthlessly, laughing as they did it, drunk and looking for someone to rob. They had found it in Talan who was so hopelessly in love he hadn’t seen them sneak up on him. While he lay there in the snow dying from his injuries, one eye shut and swollen, the other able to see only a blurry vision, he thought he saw something, something moving quick and fast. The men who had beaten him were counting out their stolen money when this thing attacked them. It tore through their flesh, ripped out their throats savagely; and didn’t just drain the robbers of their precious blood, but this thing seemed to almost be bathing in it while it fed. Talan tried to stay focused, tried to see what this thing was, but his will gave out and his good eye closed. He passed out into an injured slumber. Weight. Something heavy was straddling him . . .
ABOUT ANTHONY RENFRO
. 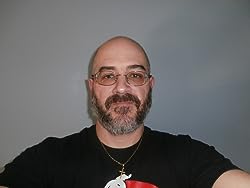 Anthony Renfro lives in Apex, North Carolina. He is a reader, writer, runner, husband, father, and stay at home dad – one of the toughest jobs anyone could ever do. He was born in Bristol, Tennessee, and is a graduate of UNC-Greensboro.You can find him at many spots on the web, but if you really need to find his center in the social media storm it would be at his blog, apoetryjourney.wordpress.com.Now reach out, just beyond the light, right into that big black space, and let him take your hand on a journey into cold dark places. You will be scared, and you may even be terrified, but in the end you might just find you liked the ride.
.
Find him on:Blog ~ Goodreads
.
See my review for Killer Treads HERE.
See my review for A Zombie Holiday Trilogy HERE.
See my review for Demon Energy HERE.
See my review for A Haunted House Tale HERE.