Kerrelyn Sparks THE VAMPIRE WITH THE DRAGON TATTOO: Do you Like your Vampires With a Side of Religion?

THE VAMPIRE WITH THE DRAGON TATTOO 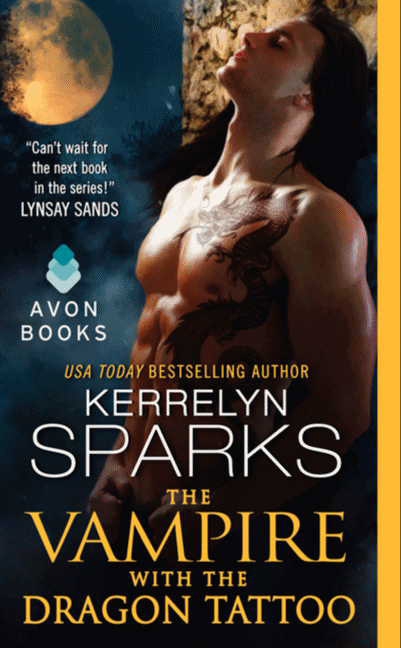 He's out of control
Dougal Kincaid has something to prove. After being injured in a battle with the Malcontents, he's ready for active duty protecting unsuspecting mortals from these villainous vampires who want to rule the world. But first he has to get control of himself . . . because just the sight of a certain lovely doctor has his injured hand doing some peculiar things, not to mention the sizzling sensation that burns along his dragon tattoo . . .
Vampires? Vampires?! As a scientist, Leah is having trouble believing that these immortal creatures exist. But there they are, standing in front of her, asking for help in solving a genetic puzzle that can save mankind. There's even one in a sexy kilt! Just one look into Dougal's gorgeous green eyes sets her pulse racing. But can she trust him—and the overwhelming desire that refuses to be ignored . . . ? Avon/HarperCollins Publishers

This is the 14th entry in Kerrylyn Sparks' popular Love at Stake series. I have not read every book in the series; I can't recall why exactly but they felt funny, way out there, were mixed up between weird scenarios like harems and such. In VAMPIRE WITH THE DRAGON TATTOO the phrase "Heavenly Father" is much used as the angels in the book have to come from somewhere.

The title refers to a large tattoo of a dragon Dougal wears in his torso. It has no parallel to the book "THE GIRL WITH THE DRAGON TATTOO."
For the rest of my review