When a fellow RN jokingly predicts that Beth Roberts will meet a tall, ripped and totally lick-o-licious stranger who will fulfill her deepest desires, it’s supposed to be from across a crowded room, not giving CPR to a wedding guest. Given her tragic love life, Beth has no desire to become involved again, but who could have predicted the ponytailed doctor with the mischievous smile would break through her defenses?

Dr. Gabriel North blamed himself for his wife’s death. Now, after two years of battling guilt and meaningless hookups, he’s ready to move on. When he sees the sexy brunette at his friend’s wedding, his attraction is swift and strong, and he wastes no time in pressing his advantage. One night with the woman who makes him feel alive again isn’t enough, but gaining her trust as a man was going to take more than medical school had prepared him for.

The author has created a charming contemporary romance that gives the reader a taste of second chances at love and happily ever after with characters that are easily related to and believable.  Once I started reading this wonderful story, I was unable to stop until I had read the very last word. 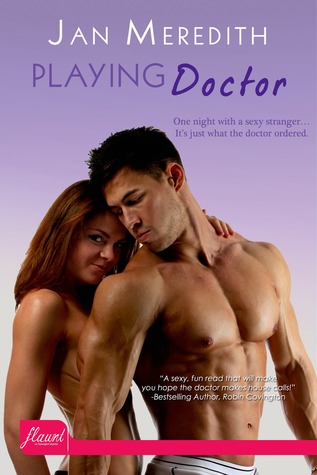 There isn't really much to tell...I drank, I fought...I made my ancestors proud...no, wait. That's from Thor! Make that, I live, I laugh...and I take what life hands me and run with it. Sometimes I chase it, sometimes it chases me. The main thing is, when we meet in the middle, things happen. What we decide to do with it is what makes us what we are.
Gah, that's deep! *shivers and shakes it off*

What can I say? I'm a wife (married my high school sweet heart at 19), I'm a mom (two handsome son's, Phillip and Justin). I went to college when other women my age were slowing down and cuddling grand babies. I love nursing and all the baggage that comes with it. What does that have to do with writing, you ask? Not a thing, except that before, during and after all of the above happened to me, I wrote. Poetry, journals, short stories, captions on photographs (mostly about a couple of doctors I used to work with, but I digress)...what ever caught my attention.

When the boys were small, I pounded out two manuscripts on a typewriter, and by pounding, I mean on a manual monster! They rest in a boot box, covered in red mark-ups from my "unofficial" agent at the time, waiting to be dusted off and updated.

Life stepped in, as it often does and my writing was shelved when I went back to public work. And then I read a book titled, TWILIGHT.
I don't know what it was about the story (it was written in first person point of view, and I don't usually like those), but after reading the books and seeing the first movie, the writing bug bit me again and I began twiddling around with a story about a Navy SEAL home on leave for his brother's wedding, and a romance writer whose lackluster love life was taking a tole on her writing. In the mean time, Harlequin Mills and Boon was running an Editor's Pitch for their Medical romance imprint, and I thought, humm, I'm a medical person, I can do that! To enter the contest, we needed to writer a two-paragraph blurb and the winners chosen would do a ten minute online pitch with the editor. That was it.

I sat down and looked at my SEAL/writer book and considered revising it into a doctor/nurse story, but Ian and Eve didn't want to be missed with and liked their story just the way it was, so I took a look at the secondary characters in their book. One of the groomsmen was a doctor! Dr. Gabriel North. Doesn't that name just make you sigh? Having failed to see the signs of the very medical condition he specialized in, Gabe was overcome with guilt when his wife died from a pulmonary embolus (blood clot to the lung). What he needed was a kick ass nurse to show him the road back to the land of the living.

I had also been tossing around an idea for a story involving a survivor of domestic violence. Beth Roberts, RN needed a big hearted, handsome man to show her how to trust again. Enter Gabriel North...just what the doctor ordered!

I wrote the blurb, sent it in and figured, what the hey, I'll never hear from that again, but it was fun doing it. A few weeks later, I got an email telling me I was one of six chosen to pitch "A DOCTOR IN THE HOUSE" to the editor of the Medical imprint. Happy dancing followed. I did the pitch and was asked to submit a three chapter partial.

Now, that partial got me the most awesome two page feedback/rejection letter ever from Flo Nicoll, editor of HQN M&B Medical romance, with likes, dislikes, suggestions and an invitation to write something else and submit it. Gabe and Beth shouted the roof down, "Don't leave us! Tell our story."

Taking the advice from Flo's letter, I revised the chapters and went in search of a publisher to submit them to. I found an article about a new publisher who believed that authors who write great books should receive the majority of the profits. I thought, wow, that's the place for me! The were also getting ready to launch an exciting new imprint called, Brazen. The more I read about their business model, the more impressed I became, so I gave my precious chapters another read and sent it to Heather Howland. A few days later, I got an email asking for the full manuscript.

I did a little dance around the house and got to work. In the mean time, I did NaNo Smackdown, the one week Bootcamp before doint NaNoWriMo with Entangled Publishing, also with Heather and her lovely assistants, Sue and Tahra. (Guys, don't pass this workshop up next time around! You learn so much.) Anyway, I struggled with how to end my book, now titled, PLAYING DOCTOR--much sexier title, way sexier book :)
In the end, I submitted it as a novella.

Now, what I haven't told you is, during the time that I was finishing the book, I was taking workshops through Savvy Authors. During one, I used the first chapter of PLAYING DOCTOR, and the instructor (the then, senior editor from Total-e-bound) emailed me saying she'd like to see the book. What to do? Then I thought, what the hell? Worst that could happen was  it would lay around for 3-4 months, and I'd get another rejection and more feedback, so I sent it in.

To my surprise, two days later, I got another email from the TEB editor saying she was sending it to her content editor, who would most likely offer a contract, which she did...two days later!

This is what you call an, Oh, Shit! moment.

I immediately emailed Entangled. A few days later, I got an email from Tahra Seplowin saying she'd seen on my blog that I had been offered a contract for PLAYING DOCTOR, but that Entangled was interested in taking it to acquisitions. Now, this was a bit more than I had expected. In the end, I went with my gut...and Entangled, and I haven't been sorry since.

And that original book, the one about the SEAL and the writer...their story is in the works titled, Educating Eve, along with another friends to lovers story, titled, Taking Charge, and a sizzling story titled, After the Storm.

Where to find more books by Jan Meredith: