Have You Ever Had a Neighbor from Hell? Playing for Keeps by RL Mathewson 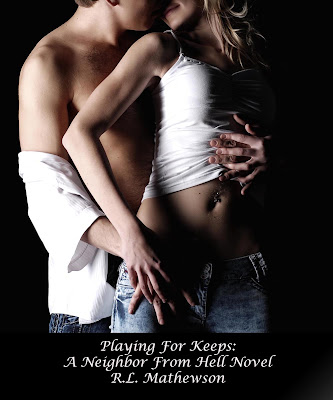 Done with being the world’s biggest pushover, Haley decides that things are going to change starting with the aggravating neighbor who has too much charm and not enough restraint. What she didn’t expect was to sucked into his world, but Haley has a game plan and she won’t let herself forget just what the bad boy next door is capable of.
The last thing Jason expected was for his little shy neighbor to go Rambo on him over some ruined flowers. After he decides to take her under his wing he can’t help but that notice that she fits very nicely in his life. Now the only left is to convince her that this is anything but a game. R.L. MATHEWSON

Despite some obviously unbelievable stuff, this book was light and  a welcome diversion with pretty steamy romance.  It dwelled a little too long in the land of virginity preservation while it explored a lot of other sexual possibilities but those were well-and-thoroughly explored. MORE