This intriguing cover of Wormfood Island by Ken La Salle wasn’t the first thing that caught my attention, it was the title.

I can’t help but smile and think… bad things are a comin’.

ENTER AT YOUR OWN RISK 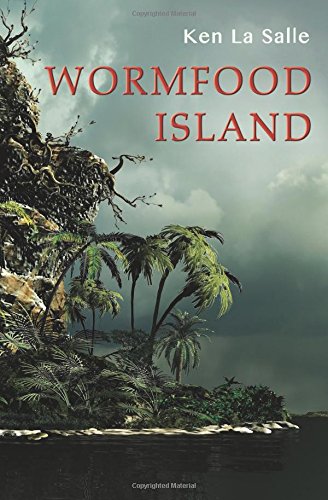 A beautiful tropical island…not so much.

Flawed characters that end up in a shitload of trouble, very much so.

Kevin Miller had turned into a couch potato, just waiting for death to claim him. Until…

He has everything riding on next week…the trip.

It started with a BITE.

The character chosen to set off the chain of events that will have the others in shock or sent running and screaming to their death, was a bit of a surprise, but when I think about it…perfect.

I love flawed characters and Kevin is a doozy. I sure hope he mans up.

As the story progresses, so does the contagion.

Zombies run wild, with the uninfected unable to believe what they are seeing.

Imagine, if you knew the changes you were going through, what you would become, unable to change the end result.

As an example of the humorous horror, I will share the head of securities comment while watching a woman bite off a man’s penis:

“Don’t you have any sense, you two? Can’t you see people are watching you?”

There is tons of running, screaming, shock and awe, and blood and guts a plenty.

Half the time I didn’t know whether to laugh or cry, so I laughed. Sorry, perhaps I am a bit twisted myself. LOL

I received Wormfood Island by Ken La Salle in return for an honest and unbiased review and I can hardly wait to see what he comes up with next.

Wormfood Island is the story of a family on the verge of collapse. When they win a trip to a hedonism resort out of the country, Kevin Miller hopes this is the chance they need to save their marriage. But instead, they find themselves quickly facing a quest for survival against an infestation of parasitic worms that cause the infected to gain monstrous sexual appetites…which quickly turns to an appetite for living flesh.

“Novelist and Playwright, Ken La Salle grew up in Santa Ana, California and has remained in the surrounding area his entire life. He was raised with strong, blue collar roots, which have given him a progressive and environmentalist view. As a result, you’ll find many of his stories touching those areas both geographically and philosophically. He’s also very funny.”