Giveaway – The Vampire, The Hunter and The Girl by Martin Lastrapes

The cover for The Vampire, The Hunter and The Girl by Martin Lastrapes made me curious. Check out the drop of blood on the tip of the blade. I love a visual image that includes hidden elements that pop out at closer inspection. How frickin’ cool is that? Excellent job, Martin. 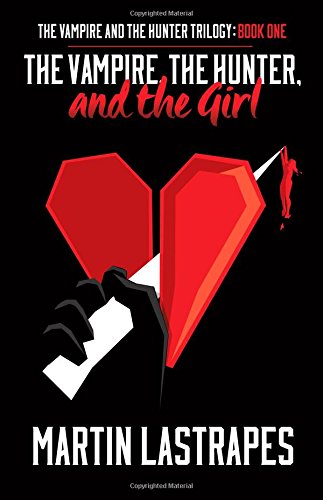 The Vampire, the Hunter and the Girl by Marti Lastrapes is Book I of a trilogy. The title tells us there will be a triangle, but this triangle will include some unusual characters in unusual situations. I see some serious problems ahead for all of them.

They were brought before Dracula. Why? Let’s read on and find out.

Adam is a vampire and his biggest problem is boredom, so he takes up a hobby, bowling. Cherry, a vampire, had found him there and after she changed him they became inseparable. When Cherry disappears he notices Olivia.

Jesus is the Mexican vampire hunter. His mother had been killed by a vampire, so he became a latch key kid at a very young age. The WWF and wrestling were his babysitters. He had wrestled in school but mixed martial arts was what he wanted do. He’d only had one friend, Daniel and they had a plan. Jesus would be the fighter and Daniel the trainer until…

Now, Jesus walks the dark side and uses himself as bait to lure vampires in for the kill.

Olivia works at the bowling alley and is a huge wrestling fan. She is writing a book about vampires. Her memories draw her to Heritage Park. She loves looking out at Rancho Cucamonga, feeling the dewy grass beneath her feet and the air flowing around her body as she swings to and fro, until…

Adam and Olivia become friends of a sort. She lets him feed and he gives her information for her vampire novel. How dysfunctional is that?

Jesus and Olivia meet at the gym where he works and trains, the Ground and Pound. She was there to learn self defense.

Olivia’s friend Elowyn strips at Tropical Lei where Olivia also bartends. Johnson is Jesus’s friend at Ground and Pound . The scene where Elowyn and Johnson are on a date and Victus, a vicious vampire, sees them is great. The vampire TV shows and movies I have seen help me to visualize the action and I love it.

Elowyn and Olivia’s ideas of life seem very naive, but had a ring of truth to them. It adds a bit of reality into their fantasies and expectations and shows how different life really is – life lessons.

The Barbershop, vampires went there for a cut and dinner. A gruesome scenario, where humans are chained to the wall, half dead to almost dead to barely alive. Would a vamp care if they were filthy and stank of day old sweat and fear?

A girl, a boy, a vampire – not your normal triangle. The story being told from different character views, was good and bad. At times, the story seemed to jumped around a lot with the repetition slowing down the pacing, but I did like the different characters descriptions of the same event. This is an ARC, so I think this can easily be improved upon before the finished product is released.

I found some originality in the storyline. Martin Latrapes development of the characters brought them to life on the pages. I really wanted them to end up friends, but something tells me that cannot happen. What do you think?

I received an ARC in return for an honest and unbiased review.

ABOUT MARTIN LASTRAPES
.
MARTIN LASTRAPES won the GRAND PRIZE at the 2012 PARIS BOOK FESTIVAL for his debut novel INSIDE THE OUTSIDE.He grew up in the Inland Empire, has a Bachelor’s Degree in English and a Master’s Degree in Composition from Cal State San Bernardino, watches his favorite movies over and over again, learned many a lesson from professional wrestling, wonders if he’ll ever be famous enough to be on “Dancing With the Stars,” thinks good stand-up comedy is rare and under appreciated, is scared of Vladimir Putin, wonders if it’s too late to learn how to play the guitar, gets depressed when he hears the theme song from “M*A*S*H,” wonders why Teen Wolf never made it to the NBA, and wants Morgan Freeman to narrate his life.

He is also the host of THE MARTIN LASTRAPES SHOW PODCAST HOUR. Subscribe on iTunes or listen on the official website  MartinLastrapesShow.com. New episodes every week.