Footprints in the Frosting by Laura Pauling

Footprints in the Frosting
by Laura Pauling 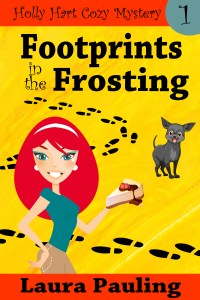 I love the vibrant and fun cover of Laura Pauling’s Footprint in the Frosting, so I will follow the Footprints…to the conclusion.

Holly Hart’s new business, Just Cheesecake opens with a dead body in her dessert. With the help of her faithful companion, Muffins, she decides they must investigate the murder themselves. Right off the bat, I am smiling.

Her scruffy dog, Muffins, has a habit of leading her to the rich, hunky Mason Carlton. First he catches her in her pajamas and they share a cup of coffee, then he catches her lurking around his mansion. Muffin has good instincts about people, but why does he keep leading her to Mason? I think it’s too obvious for him to be the killer.

There is a lawyer who could be Santa Claus.

Charlene is the small town’s crazy cat lady. At first I don’t know whether to hate her or love her, but she kinda grew on me. She is quite the character. Will she become a friend or foe? I think we both know. Did she hide her smarts under a crazy layer? I couldn’t help but chuckle when Charlene talks about old people diapers. I will leave it to you to discover for yourself. It is worth your time.

The writing caused me to burst out in laughter now and then. Even the cop has a great sense of humor. The dialogue was sharp, snarky and witty, especially Holly’s part.

I left my Footprints, in my walk through Fairview’s cast of characters, as Holly investigates the murders. There are more than enough suspects, but none of them appear to be the real one…even Millicent. And how about a mystery book club? Holly will have a little more help now.

Food fight – a little cheesecake here, a little jello there.

Footprints in the Frosting is a fun and light summer beach read that will brighten your mood and keep you entertained. I hope the people around you don’t think you’re crazy when you break out in laughter.

I received Footprints in the Frosting by Laura Pauling in return for an honest review.

It’s the Grand Opening for Holly Hart’s new business, Just Cheesecake. When footprints in the frosting lead to a body facedown in one of her cheesecakes, Holly becomes a prime suspect.

With her opening day delayed, Holly deals with a nosy no-good reporter and the local cop, the handsome Officer Trinket, as she puts her sleuthing skills to the test to save her business and her name. With the help of her dog, Muffins, she needs to find the real murderer, before the killer looks to frost someone else. 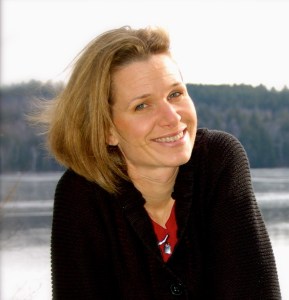 Laura Pauling writes about spies, murder and mystery. She’s the author of the young adult Circle of Spies Series, the Prom Impossible Series, the time travel mysteries, Heist and A Royal Heist, and the Holly Hart Cozy Mystery Series: Footprints in the Frosting and Deadly Independence with more coming.

She lives the cover of a suburban mom/author perfectly, from the minivan to the home-baked snickerdoodles, while hiding her secret missions and covert operations. But shh. Don’t tell anyone. And she may or may not actually bake cookies. You decide.

Visit Laura at http://laurapauling.com to sign up for her newsletter and receive a free Holly Hart cozy mystery novella.