Day of the Dragonking, Book 1 of the Last American Wizard by Edward B Irving
Day of the Dragonking: Book 1 of the Last American Wizard is a new novel based on the concept that America has been attacked à la 9/11 but the motives are mystical and the weapons are magical. The essence of magic washes over a contemporary Washington DC; Democrats become Elves, Republicans dwarves, and statues walk. Those few natural magicians in our society become powerless, the NSA's supercomputers are suddenly sentient, and the long-lost Lord Talbot Inn (which was always lost in a back alley even when it existed) reappears.
The characters are a failed journalist who is drafted as The Last American Wizard even though he doesn't believe in magic, a woman who used voodoo to appear as a man and become a Navy SEAL, the ghost of a Chinese factory worker trapped in a smartphone, and the first program the NSA ever ran (who spent the 80s hiding in a Japanese wristwatch.
Yes, Dragonking is a Swiftian satire of contemporary DC but I threw in a good bit of the odd information that has come my way but never quite made it onto television to make it fun as well. I began my career as a motorcycle courier carrying newsfilm of Watergate and ending up writing novels. In the middle somewhere, I was a TV news producer and won 4 Emmy Awards, DuPonts, Peabodys and covered wars and witlessness around the globe.
“Dragonking” got a strong review from Kirkus and a Starred Review from Publishers Weekly,
Kirkus Review: “Irving…a producer of Emmy Award-winning news television and a journalist well-acquainted with the Beltway, makes good use of clichéd Washington stereotypes by mashing them together with fantasy tropes, breathing new life into political satire.”
Suspense Magazine: "The Last American Wizard" will twist you in knots while expanding your imagination. You will never look at magic the same again."
http://beckvalleybooks.blogspot.co.uk/2016/05/day-of-dragonking-boo... 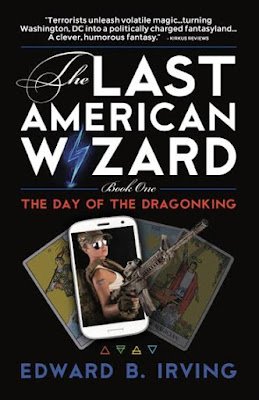