"DOWN" Has a Terrifying New Meaning

DOWN: PINHOLE by Glenn Cooper 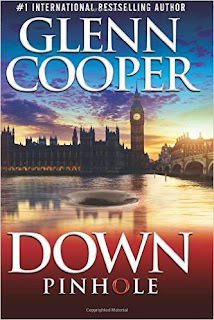 Poor room service – bad weather – a one star hotel … these are all things that would make you describe a recent trip as “the vacation from hell” but Emily Loughty gets a totally unexpected vacation “in Hell” … not so affectionately referred to as “the Down” by it’s unfortunate residents.
Emily is the research director for the world’s largest super-collider, many times larger than it’s cousin in Cern, as it tunnels its way around London.  On that fateful day they fire it up, hoping to make history.  Unbeknownst to Emily, her fellow researcher makes a decision to override the safety protocols and push the collider to its maximum capacity.  Emily is standing in the wrong place at the wrong time when the wall between universes warps.  All of sudden Emily is gone and in her place is a dirty, disheveled looking man who soon causes chaos for the lab.  Not knowing what really happened to Emily, her boyfriend John Camp is determined to repeat the experiment and go after her.  They parted on very unfriendly terms at their last meeting and he is determined to move heaven and earth to get her back.  Little does he know that is exactly what he will need to do as he follows her into the “Down”.
Since his release of “Library of the Dead” Glenn Cooper has been an author whose work I grab off the shelves.  In many fairly significant ways this book is different from his other works.  It hurts me to say that I am a little on the fence about this one.  I had moments of  “Gee, I really like this book, but …”.  It was never enough of a “but” to make me stop reading, just slow down a little and ponder.  I have come to enjoy Mr. Cooper’s (usually) three time period tellings, using characters from each era to advance the plot.  The historical figures make the story that much more interesting.  While there are an abundance (dare I say, almost an over-population) of historical characters in this book, their world is the story and our modern day heroes move their story along.  It’s a twist I needed to get used to.
Mr. Cooper’s “Down” is an interesting world, brought to life for the reader in all its grey, dismal and odorous glory.  Each historical figure’s explanation for why they are in the “Down” is this book’s nod to history and I enjoyed that aspect very much but the explanations were a little lengthy at times, slowing down the book's action.  I felt as if Mr. Cooper was not giving his readers enough credit for being aware of who these historical figures were.  During those pages the descriptions and dialogue took on an almost YA quality and this made me feel as if Mr. Cooper was writing down (no pun intended) to his readers.  The “Down” was a highly imaginative setting and it was an interesting twist on the “time travel” idea.  The parts of the book that took place in the present were great to read, but maybe a little few and far between … sometimes I felt stuck in the “Down” much like John and Emily.
Despite all that, I did enjoy Mr. Cooper’s world of the “Down” and, for me, it raised some questions.  Why is the “Down” primarily medieval?  There was a decided lack of “Down” inhabitants post mid-20th century … where are they?  With the reference to Dante’s Inferno in the book description, is there a level of “Down” we have not been introduced to yet?
Overall, I did enjoy the book.  It did end on cliffhanger – not unexpected since this is the first in a trilogy.  Do I want to read "Down: Portal" the next in the series … absolutely!  My curiosity was peaked too much not to.
I’m also one stand-alone book behind – I need to get a copy of “Near Death”!
* I received this ebook at no charge via Netgalley in exchange for an honest review * 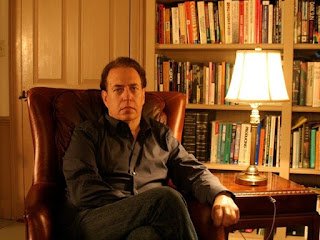 ABOUT THE AUTHOR (from Amazon)
Glenn Cooper has a background in archaeology from Harvard and practiced medicine as an infectious diseases specialist. He was the CEO of a biotechnology company for almost twenty years, has written numerous screenplays and has produced three independent feature films. His novels have more then sold six million copies in thirty-one languages. He lives in Gilford, New Hampshire.