Finding a mate is the farthest thing from alien warrior Jared Bennett's mind. After years of exile on Earth, the king is close to developing a weapon that will alter the fabric of time and hopefully bring peace to his own people. But a chance encounter with scientist Kelsey Wells ignites a scorching desire far more consuming than talks of rebellion.

To Kelsey, Jared's heritage is exotic and alarming - nothing like the logical, scientific facts of her own world. But despite her fears, she can't deny the heated response of her body every time the magnetic leader comes near.

As the bond between them grows, Jared struggles with a shocking family secret that keeps him from claiming Kelsey as his own. And a visitor from the future escalates Jared's battle for his people's freedom to a fever pitch, forcing the lovers to face one inescapable fact: Time can save them, as much as it can destroy them.


*The Parallel Series was originally released as the Midnight Warriors series. Kindle editions now include updated scenes and bonus material!*

The first book in the Parallel series is a fascinating alien romance that keeps readers on their toes.

Alien warrior Jared Bennett has spent years in exile on Earth developing a weapon that will alter the fabric of time and hopefully bring peace to his own people. The last thing on his mind is finding a mate, but a chance encounter with scientist Kelsey Wells ignites a scorching desire far more consuming than talks of rebellion.  Jared’s heritage is exotic and alarming to Kelsey but despite her fears she can’t deny the heated response of her body. Jared struggles with a shocking family secret that keeps him from claiming Kelsey as his own, but a visitor from the future escalates the battle for Jared’s people.  Forcing the lover’s to face one inescapable fact: Time can save them, as much as it can destroy him.

This steady paced plot keeps the readers on the edge of their seat with suspense, action and romance.  The author brings the intriguing story to life with vivid imagery and details that capture the reader’s imagination.  The story opens up the reader’s mind to the possibilities of visitors from other worlds living amongst us and keeps us intrigued with their differences and similarities.  The characters are strong and compelling and grab the reader’s attention from the very beginning.

The attraction between Kelsey and Jared burns hot and the sex scenes explode with hot and steamy passion.  The author conveys the emotions and personalities of the characters with a vibrant intensity that makes it easy for the readers to relate to them and understand their motivations.

While there were a couple of spots where I felt the story sort of dragged, overall the story was entertaining and enjoyable. The world and characters created by the author is captivating and certainly worth reading continuing to reading the next books in the series and discover how these characters and their stories develop. . 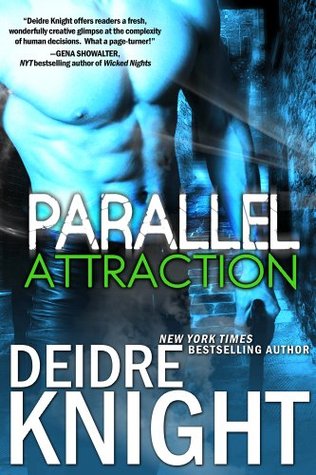 New York Times bestselling author Deidre Knight is proud to answer to the titles of literary agent, mom, wife, southern woman, and novelist. She founded The Knight Agency in 1996, and has since grown TKA to international prominence. Over her nearly twenty year agenting career, she has discovered and launched many marquee authors, and shepherded authors of fiction and nonfiction onto every major bestseller list.

Deidre began her writing career at age nine, when her award-winning essay on Barbie was published in her hometown newspaper, the Atlanta Journal-Constitution, and she has been writing in one form or another ever since. Her dream of writing romance came true in the form of her debut series The Midnight Warriors, which launched with PARALLEL ATTRACTION (Signet/Eclipse) in 2006. Since then, Deidre has published sixteen works in romance, women's fiction, and erotica.

Deidre's acclaimed contemporary romance, BUTTERFLY TATTOO, has been labeled "a rare and different gem," and praised by Publishers' Weekly as a "weepy and affecting" read, and is listed on www.DearAuthor.com as a "Top 100 Romance of all Time."