A soldier looking for redemption falls into the arms of the empire's Black Widow...

Galerius, former Captain of the Legion, is honored to be given a chance to redeem himself by discovering who is behind the failing barrier. A series of anonymous letters all point to Hostilius, governor of Lucrilia, but Galerius thinks he'll learn more about the plot by seducing the governor's thrice widowed daughter, Claudia. Although he warns himself not to fall into snare of the empire's most deadly temptress, one kiss leaves him begging for more.

Claudia has spent years as a pawn in her father's political games and longs to break free of his rule, even it means betraying him to the emperor. When Galerius arrives in Tivola, she's not sure if he's there to aid her father or stop him. She willingly submits to his seduction, despite their class differences, in order to find the truth. What she doesn't expect to find is a man who indulges her secret fantasies, satisfying her in a way none of her previous husbands did, and treats her as something more than a conquest. As time runs out to thwart her father's plans, she must decide if she can trust Galerius not only with her life, but her heart.

The third book in the Deizinan Empire is a thrilling and mesmerizing read.

A former captain of the Legion, Galerius is honored to be given a chance to redeem himself by discovering the traitors planning the downfall of the Empire.  Having spent years as her father’s political pawn, Claudia longs to be free of his rule, even if it means betraying him to the emperor.  As time runs the two must find a way to trust each other and their hearts.

This steady to fast paced plot is full of magic, intrigue and plotting that keeps the reader guessing.  The author brings this riveting story to life with vivid pictures and enchanting characters that capture the reader’s imagination and doesn’t let go until the very end.  The plot flows smoothly from scene to scene making it easy to follow the intricate political web as well as the romance building between the two main characters.

The chemistry between Galerius and Claudia is hot and steamy and the well written sex scenes leave the reader scorched.  The author conveys the emotions of the characters with intense detail making it easy for the reader to understand their motivations and relate to them.

The author has created a bewitching fantasy world that keeps the reader’s attention from beginning to end and ensures that they come back for more.  The setting is enticing cross between historical and futuristic with a charm all its own adding lots of depth and interesting elements to the stories.  I have yet to be disappointed in a book written by this author and I highly recommend this book to anyone that like fantasy romance. 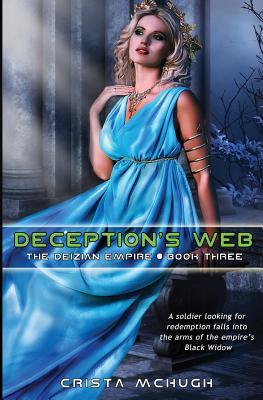 Crista McHugh is a multiple award-winning author of fantasy romance and paranormal romance with heroines who are smart, sexy, and anything but ordinary.

Growing up in small town Alabama, Crista relied on story-telling as a natural way for her to pass the time and keep her two younger sisters entertained.

She currently lives in the Audi-filled suburbs of Seattle with her husband and two children, maintaining her alter ego of mild-mannered physician by day while she continues to pursue writing on nights and weekends.

Just for laughs, here are some of the jobs she's had in the past to pay the bills: barista, bartender, sommelier, stagehand, actress, morgue attendant, and autopsy assistant.

And she's also a recovering LARPer. (She blames it on her crazy college days)

Where to Find the Author: