Book Tour & Reviews: Something To Howl About & Baby, I'm Howling For You (Alphaville .5 & 1) Christine Warren 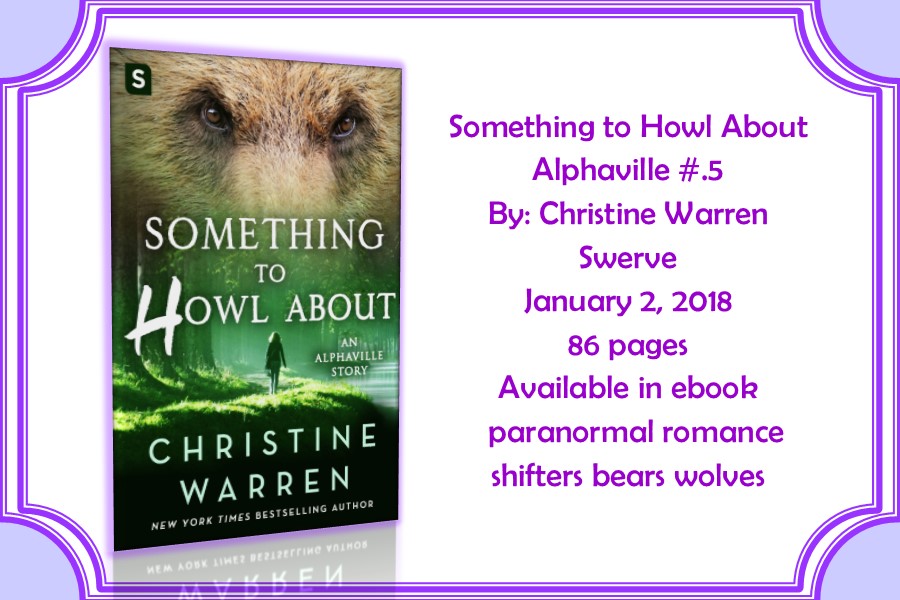 Something to Howl About

WELCOME TO ALPHAVILLE, where the she-wolves and alpha-males play. . .for keeps, in a brand-new paranormal romance series from New York Times bestselling author Christine Warren.

Banished from her pack years ago, Annie’s lone wolf wandering has brought her to Alpha, Washington, home to all shifters who don't quite fit in in the "normal" shifter word. Now Annie has the chance to go back home...if only she can make good on a favor her alpha owes the mayor of “Alphaville.” But it's not much of a favor when you're helping the hottest shifter in town...

Grizzly shifter Jonas Browning has a clan in trouble. They haven't had a child born in over a hundred years...and their clan faces going completely extinct. Genetic scientist Anne Cryer has been sent to help save them. But what Jonas doesn't count on is being irresistibly drawn to the small wolf shifter, and his bear isn't about to let her go…

Christine Warren’s “Others” series is one of my favorites so I was very excited to know that she was writing a new series that takes place in the same world and Something to Howl About is the prequel to the new Alphaville series. The characters are strong, compelling and draw readers into the story and romance is full of sparks and heat which keep readers glued to the pages. The prequel is a great short story to get this series going, in fact the only thing that could possibly make it better would be if it was longer because I wasn’t ready for it to end, but that’s okay, I’m off to read Baby, I’m Howling For You now.

Something to Howl About is the prequel to the Alphaville series.

And is available in ebook at:

Baby I’m Howling For You 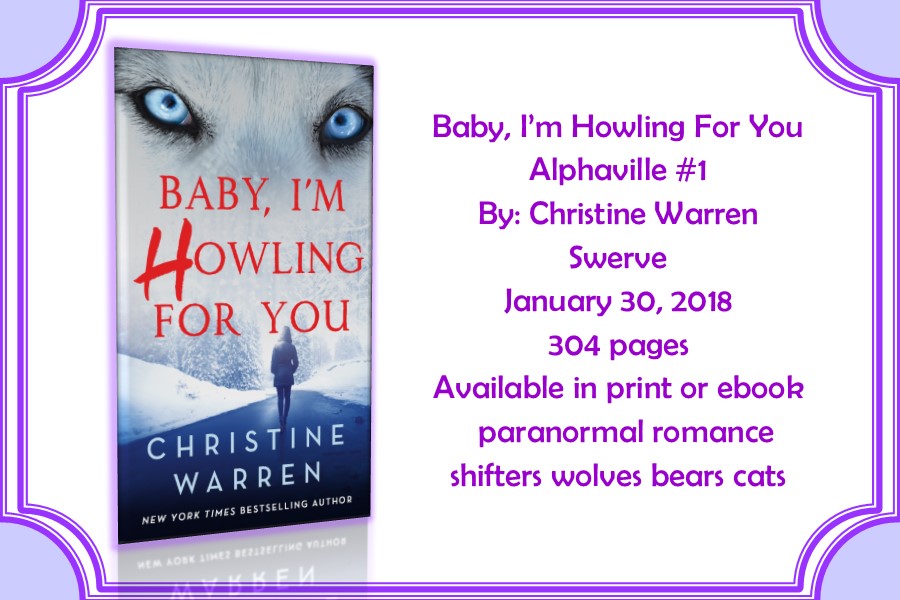 WELCOME TO ALPHAVILLE, where the she-wolves and alpha-males play. . .for keeps.

Renny Landry is a wolf on the run. Pursued by a shapeshifting stalker and his slobbering pack of killer coyotes, she is forced to flee her job as a librarian to find sanctuary in the wooded hills of Alpha, Washington. A well-secluded safe space for troubled shifters, Alpha is Renny’s last hope. But the first person she meets there is a gorgeous alpha male with fiery eyes, fierce tattoos, and one ferocious appetite—for her…

Mick Fischer thought he left his past behind when he moved to Alpha. But fate has a way of biting him in the tail when a female wolf shows up on his property. Wounded, desperate—and disarmingly hot—Renny brings out the snarling, protective alpha beast in Mick like no other woman he’s known. Can these two haunted, hunted wolves manage to mate for life…even as the deadliest past demons howl at their heels?

Well, I am sincerely pleased to announce that once again, Christine Warren has brought her fabulous world to life with well written words that paint vivid images that makes readers feel as if they are part of the story. The characters are strong, captivating and grab the reader’s attention right from the start and in this case, Renny and Mick draw readers into an emotionally turbulent romance that is full of heat and spice and you can practically feel the chemistry between them as it flies from the pages.

The fast paced plot is full of thrills and suspense that keep readers on the edge of their seat while a bad alpha keeps the danger coming as he has fixated on Renny and then the author adds a few surprising twists to keep readers guessing.  This story has it all with lots of romance, suspense, heat, great dialogue that makes it easy for the readers to relate to the characters and feel as if they really come to life and let me tell you the alpha males are super sexy and they are definitely playing for keeps, of course I don’t mind because they can certainly keep me.

Another great series from Christine Warren, which isn’t surprising since I love her other books. This book starts off with plenty of excitement and I was glued to the pages from very first one. I loved Alphaville and there is some really interesting characters that live there, so I can’t wait to visit again.

Baby, I’m Howling For You is the 1st book in the Alphaville series

available in print & ebook at:

CHRISTINE WARREN is the bestselling author of The Others series, including Wolf at the Door, Big Bad Wolf, Born to Be Wild, Prince Charming Doesn’t Live Here, and Black Magic Woman. Born and raised in coastal New England, she now lives as a transplant in the Pacific Northwest. (She completely bypassed those states in the middle due to her phobia of being landlocked). When not writing, she enjoys horseback riding, playing with her pets, identifying dogs from photos of their underbellies, and most of all reading things someone else had to agonize over.

Christine can be found at: