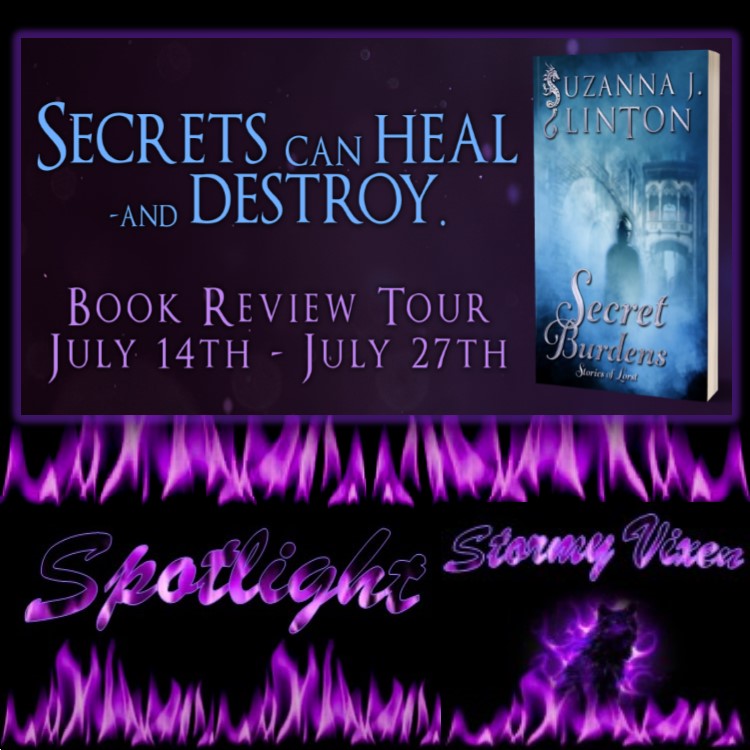 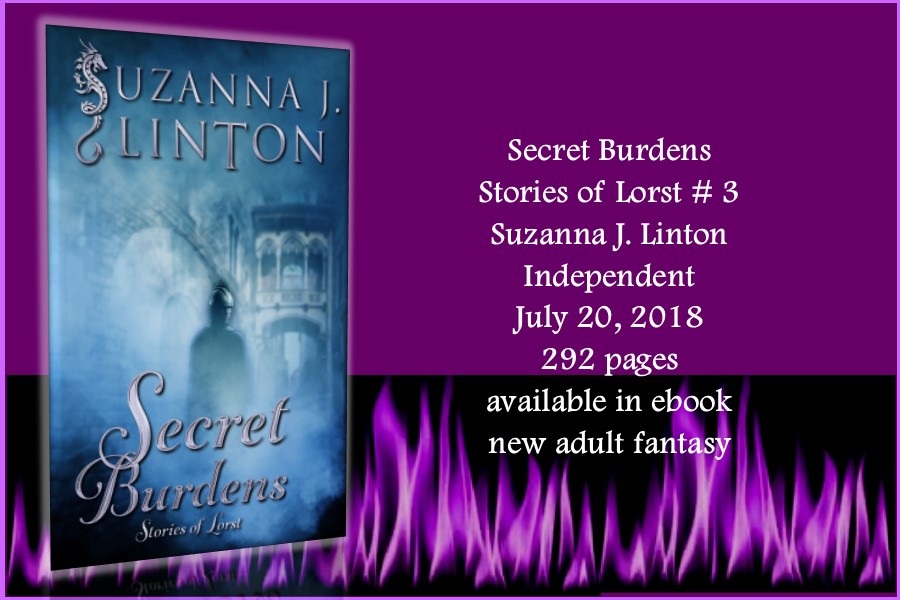 Secrets can heal — and destroy.

Jarrett failed everyone close to him.

In disgrace, he resigned his position as Captain of the Royal Guard and entered self-imposed exile in the Eastern Forests. As a common soldier, he fought the remainder of Marduk’s monsters.

A surprise summoning, though, brings Jarrett back to Bertrand. He finds Clara nearly bedridden from an assassination attempt. Tension between Lorst and Tier runs high. In need of someone she trusts, Clara appoints Jarrett Captain of the Seer’s Guard over his protests.

He searches for both her enemies and his sense of honor. However, his investigations threaten to expose secrets that could ruin them all and shake Lorst to the core.

Secret Burdens is available in ebook at: Dark clouds crowding the sky brought the sweet promise of rain. The wind, so common at this season, whipped through the narrow streets, adding a low howl to the rumble of horse-drawn carts and people going about their day. Jarrett pulled his wool cloak close more tightly around his shoulders as he rode Heartsblood into the city with Matthias at his side.
The new Captain of the Royal Guard came straight from the army and he rode his horse like a man used to sleeping in the saddle. From his friends’ letters, Jarrett knew Matthias to be competent, reliable, and with about as much imagination as a lump of coal.
What he didn’t know was how quiet the man was. Jarrett greeted Matthias that morning in the refectory before going to see Lady Clara and the man had been short on speech then. Now, on the way to see the Captain of the City Guard, what few words he possessed dried up completely.
“How do you like being Guard Captain?” Jarrett blurted.
Matthias blinked, as if Jarrett’s question pulled him from a reverie. “King Emmerich is a good man to work for.” He side-eyed Jarrett. “I only wish the King and her ladyship trusted me more. You’ll be taking on the search for her ladyship’s enemy?”
“I am. It’s not a matter of trust. Well. Not entirely.”
“The King granted her a guard for her own use. How else should I take it other than a sign of distrust?”
“There’s an entire Palace to guard. Keeping Clara out of trouble is an all-hands-on-deck position, trust me.”
“She’s an extension of the King’s power and, therefore, comes under my purview.”
Jarrett shook his head. “You have a lot to learn if you believe that.”
“What do you mean?”
“Lady Clara is only the Court Seer because she wants to be. If she considered it a good idea, she could—and would—ride off tonight on an insane quest to find the lost Amulet of the Child. Emmerich would grumble and tell her not to go but ultimately wish her good luck on her way out. She isn’t the extension of anyone’s power other than her own.” He felt a scowl tighten his lips. “And she forgets, sometimes, how her actions or words affect others.”
Matthias glanced over at him, the first bit of actual interest lighting his eyes. “That so?”
The back of Jarrett’s neck prickled and he felt certain Matthias planned to repeat what he said. “It’s nothing important.”
“If you’re having trouble with Lady Clara, perhaps I can help. I do have the King’s ear.”
Keep telling yourself that. “Thank you for the offer, Matthias. I’ll remember it. Anyway, once you start placing Lady Clara into a role that can be understood and predicted, you’ve lost.”
“I heard she made dresses for a time before leaving on her quest last year.”
Jarrett closed his eyes for a brief moment, willing more patience than he felt. I warn the man about Clara doing as she pleases and Matthias thinks of dressmaking? “Why do people still make a big deal about that?”
“It’s a common occupation. Embroidery or tapestry weaving would be more suitable for a woman of her station.”
“She came from a common origin, Matthias, and she cares little for what is or isn’t suitable.” He smirked. “She wore men’s clothing during part of her time in the mountains.”
Matthias stiffened in shock and Jarrett hid his grin. The more he imagined it, the more it seemed to him that trousers on women should be fashionable. Not only practical but it made it easier to appreciate their figures.
Realizing his thoughts were going places other than the task at hand, he pushed them aside. “Lady Clara told me you have a sketch of the brand found on the girls.”
“I gave it to Tarsus.”
“I see. Where do you think the slaves are coming from, Matthias?”
“I don’t know. Probably from the North. Slavery is still legal there, despite the King’s efforts.”
“He has an uphill climb. At the kingdom’s founding, in order to unite the Northern lords with the Southern, they signed an agreement clearly stating, among other qualifications, the Lord of Candor has the final say over slavery. And the Lord of Candor isn’t about to do something to anger the Northern lords. He depends on their trade and support.”
The City Guard headquarters and barracks came into view. Several guards, in their trademark black and yellow livery, loitered outside it, leaning against their pikes.
“What did you and Tarsus discuss, exactly?” Jarrett asked.
“We talked about how better to stop the flow of slaves into the city and possible sources. I felt it best to let him handle the investigation.”
“But slaves came to work in the Palace. That’s how it was discovered slaves were in the city in the first place.”
“Yes but hardly my fault. Or, I dare say, my problem.”
Jarrett rolled his eyes, wondering what Emmerich could possibly see in this man.
They found Captain Tarsus at his desk, going through papers. When Jarrett entered, the older man smiled and stood to clasp hands. Captain Tarsus, despite being mostly chained to a desk, was fighting trim. He came up to Jarrett’s chin and surveyed the world with cool, black eyes. Once, he and Jarrett had gotten into a wrestling match that left Jarrett limping for a day.
“How was the Eastern Forest?” Tarsus asked.
“Full of trees, dirt, and creatures that wanted to eat me,” replied Jarrett. “Matthias tells me he’s discussed the slavery problem with you.”
“Yes. My men asked their contacts but they haven’t learned anything. Since the girls were discovered, it’s possible the slave masters have moved on.”
“Do you know where the girls came from? Do they have Northern accents?”
“No, they were local.”
“Strange.” Jarrett crossed his arms.
“Maybe the slavers thought they would attract less attention.”
“But why send them to work in the Palace?” 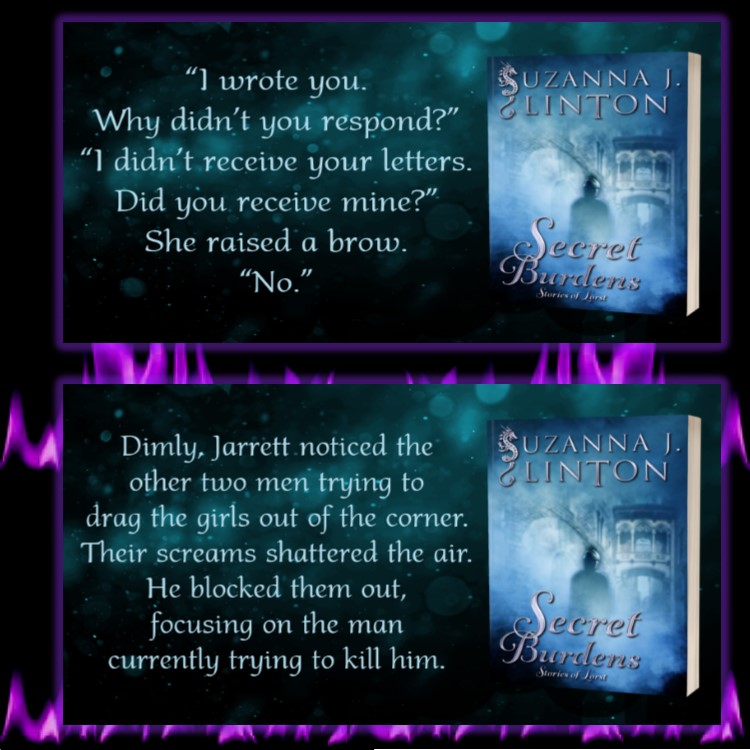 Suzanna J. Linton was born in Charleston, SC but grew up in rural Orangeburg County. At age eight, she tried to read The Secret Garden by herself. After following her mother around for a day, asking questions about the Yorkshire accent, she gave up, but that didn’t deter her in developing a deep appreciation for books and the worlds to which they open. A few years later, she wrote her first poem, which eventually led her to try writing fiction.

In 2002, she went to the summer program at the SC Governor’s School for the Arts and Humanities, where she refined her poetry and wrote her first decent short story (before this, she mostly wrote novels along with her poetry). In 2003, Suzanna began attending Francis Marion University, where she graduated with a Bachelor’s in English.

Today, she continues to live in South Carolina with her husband and their menagerie of animals.

You can read more about Suzanna and her current projects at suzannalinton.com. GIVEAWAY TERMS & CONDITIONS: Open internationally. One winner will receive a $25 Amazon gift card. This giveaway is administered by Pure Textuality PR. Giveaway ends 7/27/2018 @ 11:59pm EST. Pure Textuality PR is responsible for the delivery of the prize(s). Limit one entry per reader and mailing address. Duplicates will be deleted. 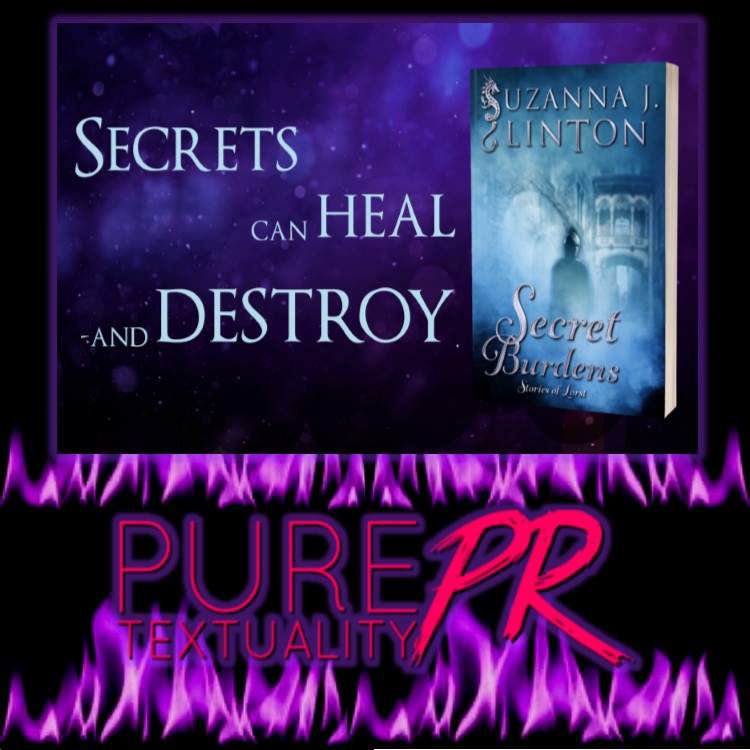