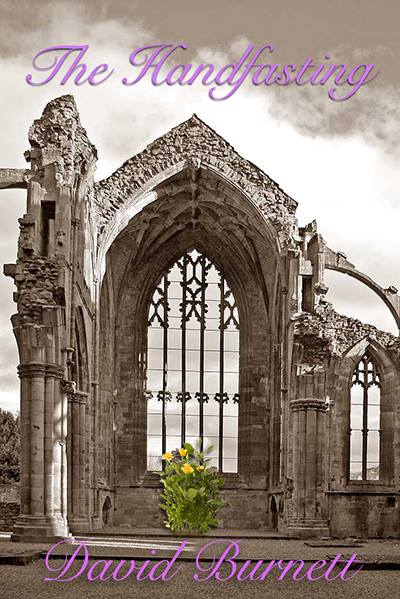 When I first began reading The Handfasting by David Burnett – the story of two students who meet, fall in love, and pledge themselves to one another in a Celtic handfasting ceremony – I anticipated that this would be an incredibly romantic or an incredibly heart-breaking love story.

After all, the promises that Stephen makes to Katherine in the ruins of the old church abbey are the stuff that fairy tales are made of.

“I’ll find you,” he had said. “In ten years, when we have finished school, when we are able to marry, I’ll find you. Until then, whenever you see a yellow rose, remember me. Remember I love you.”

Incredibly romantic… incredibly heart-breaking… it turns out that The Handfasting is a little of both.

Ten years later, Stephen does find Katherine – and re-ignites their romance by sending her a vase filled with a dozen yellow roses to symbolize their love.

But, Stephen isn’t the only one interested in Katherine’s hand. Bill Wilson – a “friend” Katherine has known since high school – has turned into a man who will stop at nothing to get what he wants. Now, Bill wants Katherine as his wife, and he intends to have her – no matter what the cost.

The Handfasting is a captivating story that will evoke strong emotions as you read it. At times, I found the book difficult to read due to triggering content. In other moments, I found myself rooting for the protagonists and thinking unholy thoughts about the villains. The attitudes expressed by all of the characters rang true to the era and setting. The ending was extremely satisfying.

If you’d like to read an unusual love story that interweaves serious social issues into its storyline – The Handfasting by David Burnett is your book!