Eve hadn’t wanted a second marriage, she wanted to remain happily unmarried rather than curse another good man to Rob’s fate. If only Tul had listened to her protestations. Instead the Senate are intent on making her relive her own personal hell. Worse, the instrument they seem intent on using to bring about her suffering is the creature, the merciless drone they’d created from all that remained of Rob.

The world seems to be conspiring against Eve and the Alliance, and even among Johan’s band of rebels not everyone is happy to have Eve as part of the group. With Tul missing and friends few on the ground, Eve begins to slip back into the pit of despair which had once consumed her and that may just lead her to behave more recklessly than ever before. Mistakes have consequences however, and for Eve the consequences of her actions may just decide the course of the future.

Is there a way to save Tul? Does anything of Rob remain in the Senate controlled puppet his body’s become? More importantly, why are the Senate determined to take control of Eve and just how far will they go to gain possession of her?

The battle continues between the Senate and the Alliance in this riveting action filled vampire fantasy.  This fascinating world filled with unique elements is a mesmerizing read that draws the reader deep into a violent world of good versus evil.  There is less flip flopping in this book than the first one, but still adds the history of the characters that gives the reader insight into their personalities.  I enjoyed this one a bit more than the first one and I definitely like how the romance between Eve and the two men is progressing. I am really looking forward to reading the next one. 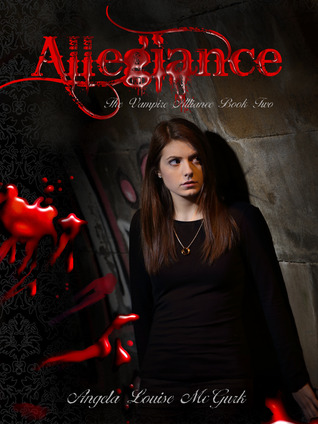 Angela is the author of the Vampire Alliance series. ‘Absolution’, book one of the series, is available for Kindle.
‘Allegiance’, book two, will be released early this year with the third and final book, ‘Antithesis’ following.

While currently occupied running her wedding stationery and graphic design business, Angela spends much of her free time writing, reading, and trying to find a way of saving all the worlds in her head before they evaporate to some forgotten place never to be retrieved. As well as being a designer, business owner and writer, Angela is the mother to two fantastic children and wife to a husband who still hasn’t read her books although he is the photographer responsible for her cover photography !

She grew up in a small Northumbrian pit village and briefly lived in Newcastle-Upon-Tyne where the Vampire Alliance series is set. One of her favourite places in the world in Rome and when she gets around to finishing the re-write of the prequel to the Vampire Alliance series this will be set in Rome. The prequel, currently going under the working title of 'Irredeemable’ has been a work in progress for fourteen years, originally written in Angela’s early teens it is currently being re’vamped’ and will be published sometime after ‘Antithesis’.

There are plans for a number of series set in the world created for The Vampire Alliance series. Some of these will be prequels and sequels using side characters introduced in the original series. It is yet to be confirmed whether these will be released before or after 'Irredeemable'.