A Sense of Place in Fiction

Authenticity is an important part of fiction, believe it or not.

Think of some of the classics, like Jane Austen’s Meryton, Elizabeth Gaskell’s Cranford, or Louisa May Alcott’s Concord. Each location has its own story, and I was drawn to writing part of Naperville’s through the Bibliophiles series to chronicle this picturesque little city as I see it every day.

Surprisingly diverse in some neighborhoods on the North side and almost stuffed into its boundaries with a 144,000+ population, Naperville is an interesting blend of city and hometown, cosmopolitan and kitsch. Fantastic restaurants, a lively bar scene, and concerts in North Central College’s Wentz Hall feature alongside the annual Memorial Day parade, the Santa House where children wait to tell their dreams, and the largest statue of a founder (Joseph Naper) I have ever seen, smaller than the Lincoln Memorial, thank goodness, but much larger than Nathaniel Hawthorne’s in Salem, Massachusetts, or even Queen Victoria’s likeness on the Mall. Me thinks Naperville has a bit of a problem with perspective. 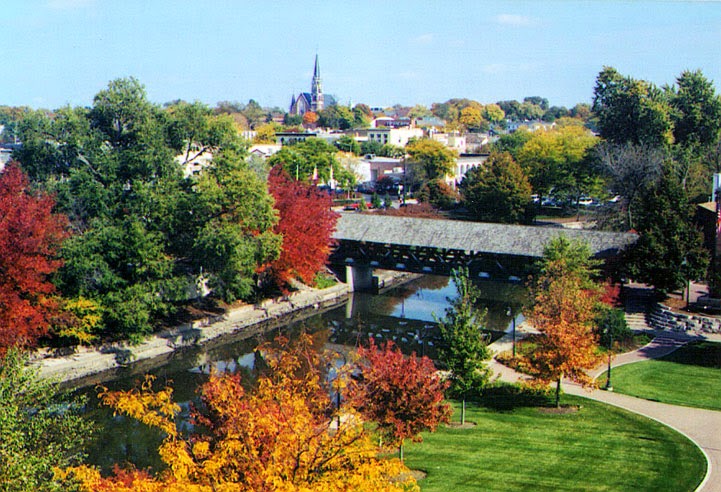 Like so many lovely places, Naperville resides squarely in a bubble, constantly placing on “Best Places to Live in the U.S.” lists for new families, retirees, probably even dogs. Residential incomes vary from upper middle class to very wealthy. The original small ranch homes of the 1970s suburban sprawl from Chicago are being knocked down to erect multi-million-dollar houses, making the ranch home sellers millionaires themselves. Nearly 98% of people 25 years or older have at least a high school diploma, the highest rate nationally, while more than 63% have at least a bachelor’s degree, according to USA Today. The school district, the reason my husband and I moved here, is nationally recognized and consistently ranks in the top of the country.

The DuPage River winds its way through the downtown area and following its path is the Riverwalk, 1.75 miles of brick paths, fountains, bridges, outdoor sculptures, a quarry turned pool, and celebratory memorials. 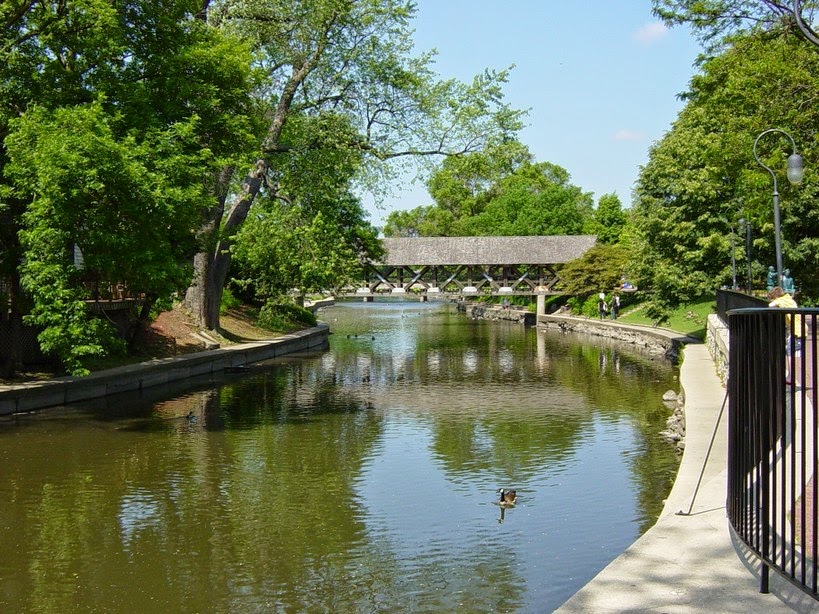 When we first moved here some eighteen years ago, there was a small, independent coffeehouse, Arbor Vitae, I believe the name was, that was right across the street from the Riverwalk. I stopped in a few times for lunch with my family or for a quick pick me up when the kids were younger. A funky place with colorful tables and a great vibe, it served hummus platters and tabbouleh before they became popular.

Those visits planted the seed of Ambrosia, the Pearson’s juice bar in my fictional Naperville.

What lurks behind the facade, under the bubble, are stories of everyday people mitigating their lives like everyone else, characters contributing to society’s fabric. That’s what interests me.

Thaddeus’s family, the Mumblegardens, moved to Naperville at the cusp of the 1980s, right as the population began to swell. The Pearsons (Spring’s parents) came soon after, fleeing San Francisco for more affordable real estate. The Mumblegardens represent the golf-playing, work at Bell Labs (now Lucent Technologies) backstory that so many people of my age come from here, while Spring’s parents are more of the outsiders doing their own thing, sometimes succeeding despite themselves as they struggle to run a business and still uphold their Hippie ideals.

Somehow, Spring and Thaddeus fall in love with the help of bibliophile Edwina Hipplewhite, moderator of the local classics book club that brings the two together in this romance for people who love books.

A Groovy Kind of Love will be released Monday, 1/12. Pre-orders are available on Amazon, Barnes & Noble, iTunes, Smashwords, and Kobo.

Karen Wojcik Berner writes contemporary women’s fiction, including the Bibliophiles series. An award-winning journalist, her work has appeared in several magazines, newspapers, and blogs, including the Chicago Tribune, Writer Unboxed, Women's Fiction Writers, and Fresh Fiction. She is a member of the Chicago Writers’Association.

When not writing, she can be found on the sidelines of her youngest’s football or lacrosse games, discussing the Celts with the oldest, or snuggling into a favorite reading chair with a good book and some tea.

For more information about Karen, please visit her website at www.karenberner.com or her blog, Bibliophilic Blather.