1. Tell us about your latest book.

My latest book is, The Andromedans, the third book in the Empire series. While book one was about life inside the Empire and second saw the same world through the eyes of the rebels, in the third book, we get to see behind the scenes of their common enemy, the Andromedans. Adrian Stannis, the hero, is kidnapped and spends most of the book as their prisoner.

2. Where did the idea for the book come from?

The key idea that captured my interest was the idea that most people don't start out intending to be a villain. Most aren't psychopaths or sociopaths and definitely not an entire civilization. So I wanted to explore a conflict from the different sides.

3. Who and what inspire you to write?

It was an old British sci-fi series called, Blakes 7.

4. Each author has his or her own inspiring journey. How did you begin writing?

I've been a computer systems analyst for a long time. We write computer code and text in point form. I used to be a whiz at spelling and word games and found it disconcerting that I was losing my edge with those. Plus at that time I was introduced to Blakes 7 and found the ending unsatisfying and incomplete. So I decided to write my own continuation of the series, plus it was an opportunity to work on my word skills. Writing became an obsession and I've never looked back.

5. What has been the most pleasant surprise about writing? How about an unexpected down side?

What became my most pleasant surprise initially started as a worry. The characters became so 'real' in my head that they would take on a life of their own, speaking and acting outside what I had planned for them. Then I discovered that this was common among writers and it's been great, when it isn't a headache because the characters don't always cooperate, and they're always (irritatingly) right.

One downside is all the work that's required to survive as a writer, apart from the writing. All the social media activities, maintaining a blog and website, attending writing and genre events. While most of it is fun, it's also hectic and takes away from my writing time.

6. Do you have any writing rituals?
I usually write with my laptop on a lap desk, sitting on a couch. I also carry my iPad around everywhere so I never lose an idea.

7. Do you write your books in order?

I write when I'm inspired, which isn't always in order. When I ran into problems in book 2 of the Empire series (The Rebels), I worked on book 3 (The Andromedans). At several points, I actually had more of book 3 written than book 2.

8. What is on your writing playlist for this book?

The Andromedans has two main plots. Adrian is stripped of everything. I wanted to discover who he was, what he was made of when everything was taken away from him.

For Kali, the telepath, hers is a much darker journey. In the first book, she was more of a side character. In the second, we discover more about her past and her struggles. In The Andromedans, she is pushed to confront her greatest fear, herself.

10. What advice would you give writers who aspire to be published?

Never give up, keep working on your craft and remember that not everyone will love your baby as much as you do.

11. Are you working on anything new right now?

The fourth book of the Empire series, The Vitarans, which is scheduled for 2016, and planning for a new sci-fi/fantasy.

12. Who is your favorite character in your current book?

My favourite character is Adrian. In many ways, he is the heart of books, starting out as a victim in the first book, we follow his journey to become someone he never thought possible. My second favourite is also the hardest to write, the psychostrategist, Charles Sester. Both of them are far smarter than I am so I take great care in writing them.

13. What is your favorite book of all time?

I don't have a specific book, but I have several series of books that have influenced me. Anything by Barbara Hambly. Tolkein's Lord of the Rings trilogy and the Simarillion. The Dorsai books and the Belgariad. And Asimov's Foundations series.

14. Tell us in one sentence why we should read your book.

If you want intelligent, character-based sci-fi with a side of romance, then the Empire series is for you. 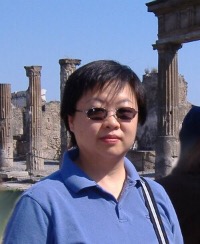 Elizabeth Lang is first and foremost, a geek with the obligatory love of science fiction and fantasy. She spent most of her life in the computer industry designing computer systems for world domination the mundane industry of life insurance, which is surprisingly, not as exciting as it sounds.

Now she creates enchanted worlds of magic, explores the human condition in the light of future technology and civilizations, and dreams about world domination. Or at least, some of her characters do.

Her first book, The Empire was fortunate enough to be a finalist in the Next Generation Indie Book Awards and she has never looked back.

Follow the book tour and enter to win an Oliie Robot from gosphero.com
http://www.promotionalbooktours.com/2015/02/the-empire-and-the-rebe...